Study: Workers Would Give Up Part of Their Salary for More Flexibility 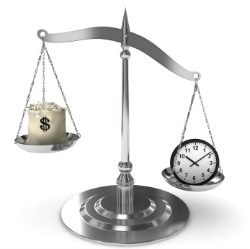 As smart phones and laptops connect workers to the office, no matter where they are, some wonder why they do not have the option to telecommute, at least part time. According to new research, many professionals would be willing to sacrifice salary for a little flexibility.

Workforce Management reports that a new survey from the staffing firm Mom Corps shows 45 percent of working adults would happily exchange part of their earnings for more flexibility at work. On average, workers said they would sacrifice 8.6 percent of their salary, an increase from 5.8 percent last year.

"We are beginning to see significant patterns in the value professionals of all ages place on workplace flexibility," said Mom Corps Founder and CEO Allison O'Kelly in Life Inc. "More and more, we feel challenged by the collective pressures of a demanding work life, a hectic personal life and a desire to find fulfillment in both."

One of the primary reasons workers said they want flextime is to achieve a better work-life balance. According to BusinessNewsDaily, this is especially true among workers with children: More than 80 percent of working parents said they believe flextime would allow them to be better parents, and 71 percent said that flexibility would be one of the most important factors when considering a new position.

"This year's dialogue surrounding work/life issues has helped professionals realize that having control over the way they work shouldn't be an extraordinary request," said O'Kelly in BusinessNewsDaily. "Companies are becoming more amenable to alternative work programs, and as professionals come to terms with the idea of flexibility, they are shaping their careers accordingly."

Still, work-life balance is not the only driver of flextime desirability: Productivity was also a central theme. According to Workforce Management, 53 percent of survey respondents said they would get more done if they were able to work from home occasionally. This falls in line with another survey released by placement firm FlexJobs last week that asked workers why they wanted remote employment. According to CBS MoneyWatch, 82 percent of those respondents said interruptions from colleagues were the primary reason they want to work from home. That figure put commuting in second place.

"Quite frankly, we expected commuting stress to be at the top of the list and were surprised at how many people chose interruptions from office colleagues as their No. 1 reason," said FlexJobs CEO Sara Sutton Fell in a statement quoted by CBS MoneyWatch.

Whatever workers' motives for seeking more flexible schedules, Life Inc. notes that data released by the Families and Work Institute suggests there is no boom in workplace flexibility on the horizon: Just 3 percent of wage and salary employees work mainly from home.

"Workers Crave Flexibility At Work Above All Else," businessnewsdaily.com, August 30, 2012, Chad Brooks

"Workers willing to give up a lot for flextime," lifeinc.today.com, August 30, 2012, Eve Tahmincioglu

Career and Education News
Home >
News>
Study: Workers Would Give Up Part of Their Salary for More Flexibility