Study: You Have Six Seconds To Make An Impression With Your Resume 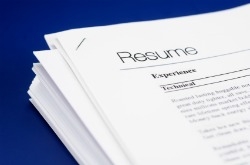 You probably spent hours writing your resume. Want to know how quickly recruiters break it down? If you say a New York minute, you're an optimist.

Life Inc. reported that despite previous research suggesting that recruiters spend four to five minutes reviewing a resume, a new study tells a much different story. According to an experiment conducted by job recruiting firm The Ladders, these professional gatekeepers actually spend an average of just six seconds reviewing resumes before giving them the go-ahead (or a one-way ticket to the shredder).

According to The Ladders, researchers used eye-tracking technology to analyze where and how long recruiters focused their gaze while reviewing resumes, a process that revealed just how long they reviewed various elements, and in what order. The results: Not only do recruiters scan resumes quickly, but they also only absorb a few key pieces of information. In fact, The Huffington Post noted that they spend 80 percent reviewing just a few items, including: your name; your current company and how long you have worked there; your previous employers and how long you worked for them; and your educational background.

The new research gives jobseekers valuable insight into how--or how not--to get your foot in the door. For instance, if you think a snazzy online profile or a image-laden document will separate you from the competition, you are right, but probably not as you had intended, reported Life Inc. According to the study, resumes with logos or graphics were more likely to frustrate hurried recruiters, earning them a spot in the "unfit" pile. The same goes for online profiles or atypically formatted resumes. Your best bet: Ditch the gimmicks.

"The 'gaze trace' of recruiters was erratic when they reviewed a poorly organized resume, and they experienced higher levels of cognitive load (total mental activity), which increased the level of effort to make a decision," said researchers, as reported by Money Talks News. "Professional resumes had less data, were evenly formatted and were described as clearer."

The Huffington Post offered the following tips for getting it right on your own: Highlight company names, nixing taglines or long-winded descriptions; label the number years worked with each employer clearly; use active, "success" verbs in lieu of more passive language. In other words, say things like "cut," "grew" or "expanded" instead of phrases like "was responsible for" or "was hired to be"; offer clear job descriptions--free of jargon or acronyms--that showcase your biggest accomplishments; and be honest about your education--lying could not only cost you an interview, but could earn you a pink slip if discovered down the road.

"The Most Important 6 Seconds of Your Career," moneytalksnews.com, March 23, 2012, Michael Koretzky

"You have 6 seconds to make an impression: How recruiters see your resume," blog.theladders.com, March 21, 2012, Will Evans

"Your resume has six seconds to get you a job," lifeinc.today.msnbc.msn.com, March 22, 2012, Eve Tahmincioglu

Career and Education News
Home >
News>
Study: You Have Six Seconds To Make An Impression With Your Resume