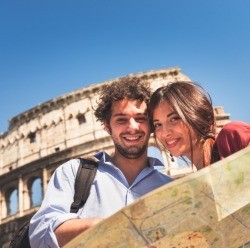 During a recent trip to China, Michelle Obama explained the many benefits of studying abroad in an overall push to encourage American students to consider international travel. According to a recent article in CNN, only about 1 percent of American students currently have the opportunity to study overseas, mainly due to financial issues, time constraints, and safety concerns. Unfortunately, students who fail to explore the world beyond the borders of the U.S. could be missing out.

"The benefits of studying abroad are almost endless," Obama said during the CNN iReport interview. "First of all, it is going to make you more marketable in the United States. More and more companies are realizing that they need people with experience around the world."

The benefits of international travel aren't just about improving job prospects, Obama noted, as reported by CNN. The relationships forged between individuals during their travels are just as important and beneficial, if not more so.

Howard Wallack, vice president of global business development at the Society for Human Resource Management, agreed with Mrs. Obama. As a hiring manager and former exchange student, he has seen the benefits of studying abroad firsthand.

"Living in another country, you learn to deal with a variety of people," said Wallack to CNN. "You learn to listen, be proactive, be patient, assertive. All those are translatable skills," he said.

Skills learned abroad may help students to stand out during the hiring process, either by showing their willingness to explore new cultures or showcasing a global perspective. Students who study abroad also learn to communicate with people with different mindsets and backgrounds, which could lead to a greater understanding of humanity as a whole. According to Wallack, students who never leave the U.S. miss out on the opportunity to truly understand other cultures, which could be seen as a negative to potential employers.

"If you just stay in your own country, you have a certain mindset about your own culture. When you step out of that, you challenge your experiences and find out about yourself, which can translate in the workplace," he said.

In order to raise awareness of the issue, organizations such as the Institute of International Education have launched new initiatives such as Generation Study Abroad, which aims to increase the number of Americans able to study overseas.

Some schools have also created their own initiatives to increase the number of students studying abroad, notes Minnesota Daily. Included in that list is the University of Minnesota who, after seeing countless students miss out on international study opportunities, or worse- use student loans to finance them, upped its efforts to increase funding for students who wish to study overseas. The school currently hopes to raise $1.5 million in scholarships for international study annually by 2019.