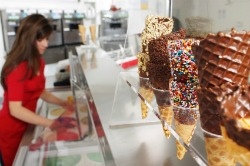 As the economy improves, more summer job opportunities are expected to become available for teens in some areas.

According to KCRG-TV9, summer employment for young people has been harder to find in the past few years. In July 2011, nearly half of people between the ages of 16 and 24 held jobs during the summer. By contrast, five years ago the number was almost 60 percent.

"I actually feel like it is improving a bit," said Nancy Zambardi, a career specialist for two high schools in Troy, Michigan, who was interviewed by The Detroit News. "I have more job postings now than I did this time last year and for a higher hourly rate."

Similarly, WISH-TV in Indianapolis reported that because the economy has improved somewhat, consumers are in a better position to afford leisure activities such as golf and swimming. As a result, seasonal hiring at such places will likely increase over last year. Indeed, large local summer employers such as Holiday World and Splashin' Safari said they have been reviewing thousands of applications to fill approximately 2,100 job openings.

In Cedar Rapids, Iowa, many openings for summer jobs appear to be available as well. According to KCRG-TV9, about 150 to 170 high school and college students have already been hired to work for the city's pools.

"We do rely on the high school and students in college to come in during summer break," said Carolyn Hamilton, aquatics manager for the City of Cedar Rapids, who was quoted by KCRG-TV9.

According to the IowaWORKS Center, the low unemployment rate of 5.2 percent in Iowa also helps create more opportunities for younger workers, because less older, experienced workers are looking for jobs.

Nevertheless, career experts note that although more summer jobs may become available, the opportunities for youth will still not be nearly as plentiful as they were a few years ago.

"While teen employment is likely to see further improvement this summer, job gains will probably once again fall short of pre-recession levels," predicted John A. Challenger, chief executive officer of the Chicago-based outplacement firm Challenger, Gray & Christmas Inc, who was quoted by The Detroit News.

Meanwhile, in different areas, teens could very well face another brutal job market this summer. As reported by the Daytona Beach News-Journal in Florida, guidance counselors at local high schools are advising students to pursue unpaid internships or volunteering opportunities, since few paying jobs are expected to be available.

Moreover, according to Sean Snaith, an economist with the University of Central Florida, drops in unemployment rates probably won't help teens looking for summer employment.

"The improvement is not quite as good as the numbers might suggest at first glance," he told the Daytona Beach News-Journal. "People are slipping down the ladder in the labor market."