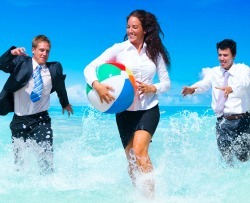 School children are not the only ones who play hooky: According to one poll, more workers are feigning illness to escape their responsibilities, too, especially on warm, sunny days.

A recent Monster poll suggests that nearly half of U.S. workers play hooky from the office, especially during the summertime when e-mail and paperwork must compete with sunshine and warm weather. According to the results, 8 percent of respondents dishonestly call in sick to work at least twice per summer, 11 percent do so at least once, and 30 percent do so rarely.

According to the Pittsburgh Post-Gazette, some experts blame the recent spike in worker absenteeism on employers' rigid vacation policies, especially during The Great Recession when even legitimate time off could earn some workers pink slips. One survey conducted by Harris Interactive late last year found that 57 percent of respondents had unused vacation time by the end of the year, and another conducted by the website theFIT showed that 54 percent of women and 41 percent of men regularly log more than nine hours of work each day. The result: Exhausted workers who are willing to fib to get some much needed time off.

"If you don't allow your employees some occasional stress relief, you're going to see a reduction in productivity," Vinda Rao, marketing manager for recruiting company Bullhorn, told the Post-Gazette. "Having a workplace environment that allows people to tend to their personal lives engenders great loyalty."

According to Life Inc., the recent uptick in absenteeism may be a sign that employees feel a stronger sense of job security. Bloomberg BNA's Matthew Sottong told Life Inc. that while the current job-absence rate is still below pre-recession levels, he expects more workers to abuse their leave benefits as job projections improve. "If this economic recovery does prove to create jobs, we'll see people a little more apt to let go of their insecurities and take the time off," said Sottong.

Whatever its cause, the employee-hooky trend has its price. "Unscheduled absences cost organizations 8.7 percent of payroll each year -- that's a significant cost," said Joyce Maroney, director of The Workforce Institute, as reported by the Post-Gazette.

It also leaves a tinge of dishonesty within the workplace. According to Rao, employers need to act to curb this trend. "The real answer is for companies to have policies where they allow a certain number of personal days off," she said in the Post-Gazette. "You don't want to perpetuate a culture of deception."

And workers will deceive. According to the Post-Gazette, entire books, websites and YouTube clips have been created to help stressed workers master the art of playing hooky from work without losing their jobs.

"The more rigid you are about rules," says Rao, "the more creative people will be to find ways to get around them."