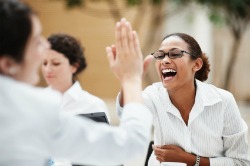 If you are looking for a new job, you might want to add your colleagues to the list of things to consider before accepting an offer--according to a new study, having supportive and friendly co-workers may help you live longer.

In a press release, the American Psychological Association (APA) reported that the study, which was published in the May issue of APA journal Health Psychology, was led by a team of researchers at Tel Aviv University. Researchers analyzed the medical records of 820 adult workers who had been followed from 1988 to 2008. The workers, who were from various industries including finance, insurance, public utilities, health care and manufacturing, were referred to a health service center in Israel for routine examinations. In addition to gathering data on each person's health examinations, researchers also asked participants questions about job demands, level of control at work and peer and supervisor support.

According to MyHealthNewsDaily, data revealed that the risk of premature death was lower among those who reported high levels of social support--defined as being helpful in problem solving and being friendly--from co-workers. Even when other mortality factors such as cholesterol levels and blood pressure, alcohol consumption, smoking, amount of exercise, age, gender and education level were taken into account, social support from colleagues was still found to be associated with a reduced risk of death. The effects were most pronounced in participants who were between the ages of 38 and 43.

"Peer social support, which could represent how well a participant is socially integrated in his or her employment context, is a potent predictor of the risk of all causes of mortality," said the researchers in the study, as quoted by Reuters.

Interestingly, researchers also found a difference between women and men in managerial roles. Women with higher levels of control and decision-making authority had an increased risk of mortality, whereas men with higher levels experienced the opposite--it seemed to have a "protective effect" instead.

Researchers also noted that although many workers tend to complain about their bosses, having a supportive manager had no impact on mortality.

Life Inc. noted that lead researcher professor Arie Shirom recommended that workers build friendships with colleagues to increase social integration and alleviate the effects of stress on one's health. Researchers also told MyHealthNewsDaily that although more research still needs to be done, findings from this study could be considered when designing workplace health promotion interventions or programs.

"Friendly Co-workers May Increase Your Lifespan," myhealthnewsdaily.com, May 11, 2011, Rachael Rettner

"Getting Along with Co-workers May Prolong Life, Researchers Find," apa.org, May 10, 2011

"The jerks at work are killing you," lifeinc.today.com, May 16, 2011, Ryan MacClanathan