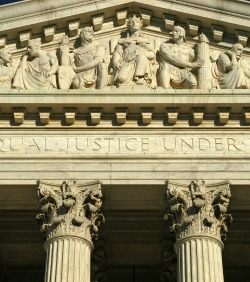 The Supreme Court has agreed to take on a new case regarding affirmative action in college admissions, The New York Times reported. The case, titled Schuette v. Coalition to Defend Affirmative Action, involves a Michigan voter initiative that barred public universities in the state from making race-conscious admissions decisions. In 2006, 58 percent of voters approved the initiative. However, in November, the United States Court of Appeals for the Sixth Circuit overturned the legislation, ruling that it is a violation of the Constitution's equal protection clause. As The Washington Post noted, Bill Schuette, Attorney General of Michigan, requested an appeal of the Sixth Circuit decision by the high court.

There are several arguments both for and against Michigan's voter initiative. For example, a majority of the Michigan appeals court believes that the initiative is a violation of the Constitution's Equal Protection Clause. Judge Richard Allen Griffin, however, argued that repealing the Michigan legislation, in fact, is "the antithesis of the Equal Protection Clause of the Fourteenth Amendment. The post-Civil War amendment that guarantees equal protection to persons of all races has now been construed as barring a state from prohibiting discrimination on the basis of race."

As noted by Inside Higher Ed, Schuette v. Coalition to Defend Affirmative Action comes at a time when the Supreme Court has yet to reach a decision on another affirmative action case, Fisher v. University of Texas at Austin. The latter case arose when Abigail Fisher, a white student who was denied admission to the school, claimed that the university's use of ethnicity and race in admissions decisions infringed upon her rights. Fisher's lawyers asserted that considering race as an admissions factor is unnecessary, since public universities in Texas already employ a "percent plan" when making admissions decisions. The plan guarantees the top 10 percent of high school graduates admission to the Texas public university of their choice. According to the argument made by Fisher's lawyers, because a large number of high schools in the state are predominantly Latino or black, the top 10 percent of students in those schools will already, by default, diversify the University of Texas at Austin's student body.

While both Fisher v. University of Texas at Austin and Schuette v. Coalition to Defend Affirmative Action deal with race-conscious decisions in university admissions, there is one key difference: While the former case involves the ability of public universities to take ethnicity and race into consideration during admissions decisions, the latter case involves the ability of voters to prevent such factors from being considered. The Supreme Court is expected to reach a decision regarding the Texas case soon, and it will begin hearings for the Michigan case in October.