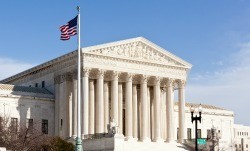 About a decade ago, the University of Michigan won a Supreme Court victory when justices ruled that colleges could continue to consider race when admitting students, a process called affirmative action. This week, the high court weighed in on affirmative action again, reported Bloomberg; only this time, it ruled that a voter-approved initiative banning affirmative could stand.

While affirmative action's critics often argue that such bans restore fairness to the admissions process, proponents contend such measures could negatively impact minorities. According to Bloomberg, Chief Justice John Roberts suggested that racial preferences may "do more harm than good" by causing affirmative action beneficiaries to doubt their qualifications.

USA Today noted that even though the Supreme Court's 6-2 decision upholds the right of states to ban racial preferences in university admissions, it also does not prevent states from permitting such policies.

"This case is not about how the debate (over racial preferences) should be resolved," Justice Anthony Kennedy said when announcing the ruling. He added that to stop Michigan voters from making their own decision on affirmative action would be "an unprecedented restriction on a fundamental right held by all in common."

Justices Sonia Sotomayor and Ruth Bader Ginsburg wrote the ruling's dissenting opinions, Bloomberg reported. Sotomayor wrote that by upholding the ban, the Court was "permitting the majority to use its numerical advantage to change the rules mid-contest and forever stack the deck against racial minorities in Michigan." She also referred to Roberts's efforts to steer the Court toward a more color-blind approach to the Constitution as "out of touch with reality," a sentiment Roberts disputed.

Proponents of affirmative action often contend that blocking race considerations from college admissions decisions could have a significant negative impact on minority enrollments. Last year, the American Civil Liberties Union (ACLU) published a fact sheet on the case, noting that African-American undergraduate enrollment fell by one-third between 2006 and 2012, a year after the legislation that banned race-conscious admissions policies was ruled unconstitutional. Hispanic enrollment declined by 10 percent during the same period, even though overall enrollment grew by 10 percent.

"Minority students and others who support a broadly diverse student body should not have to overturn a constitutional amendment simply to have their voices heard in the admissions process when everyone else can go directly to the university," the ACLU said.

Michigan is not the only state with affirmative action bans. According to USA Today, seven other states -- California, Florida, Arizona, Nebraska, Oklahoma, Washington and New Hampshire -- have similar rules, and other states may follow suit.