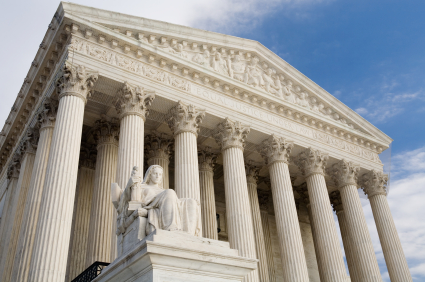 In a controversial decision which touches on freedom of religion and gay rights, the Supreme Court ruled today that public colleges and universities may require campus religious organizations to comply with anti-bias rules.

The case was brought against the University of California's Hastings College of the Law in San Francisco, which refused to accept the Christian Legal Society as a student group because it requires members to adhere to a "statement of faith" which forbids premarital sex and homosexuality. According to Bloomberg.com, recognized student organizations get priority access to meeting space on campus, may place announcements in the law school newsletter and bulletin boards, and can apply for funds for activities and travel. CLS is the only group that had been denied recognition.

Hastings had argued that state universities were required to comply with strict anti-bias rules. But the Christian Legal Society claimed that the rules infringed upon the group's First Amendment right to freedom of religion.

"If Hastings is correct, a student who does not even believe in the Bible is entitled to demand to lead a Christian Bible study," said Michael W. McConnell, who represented the student group and was quoted in The Wall Street Journal. During arguments to the Supreme Court in April, he noted that the school could bar discrimination based on "status" but not for limiting membership to those who pledged to uphold beliefs.

But the 5-4 decision, authored by Justice Ruth Bader Ginsburg, called the law school's policy a "reasonable, viewpoint-neutral condition on access to the student-organization forum." Inside Higher Ed reports that the decision said that Hastings, "caught in the crossfire between a group's desire to exclude and students' demand for equal access, may reasonably draw a line in the sand permitting all organizations to express what they wish but no group to discriminate in membership."

According to the Los Angeles Times, Ginsburg clarified that the court was ruling on the question of whether Hastings was violating the Constitution by refusing to accept the CLS as a student group. She and Justices John Paul Stevens, Anthony Kennedy, Stephen Breyer and Sonya Sotomayor rejected the Christian group's opinion that the policy would spur takeovers of student groups by saboteurs, noting that the claim was "more hypothetical than real."

Justice Samuel Alito was one of the dissenters, and he said that the decision sets a principle of "no freedom for expression that offends prevailing standards of political correctness in our country's institutions of higher learning."