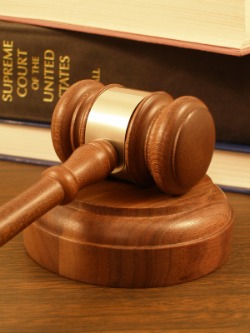 In what has become the largest employment discrimination case in the country's history, the Supreme Court on Monday agreed to consider Wal-Mart Stores Inc's appeal to a major class-action lawsuit on the behalf of hundreds of thousands of female employees.

The court accepted Wal-Mart's challenge to the decision by the U.S. Court of Appeals for the 9th Circuit in California, The Washington Post reported. The lawsuit, which was initiated by six women in 2001, seeks back pay and punitive damages that could amount to billions of dollars.

With monumental legal precedent at stake, business groups and civil rights activists are challenging one another in support of their respective causes. Business groups contend that class-action lawsuits put an inordinate amount of pressure on a company to settle regardless of whether the charges can be proved because of exorbitant litigation costs and the even more devastating potential award the court could grant the plaintiffs. Meanwhile, civil rights groups claim that class-actions are the most effective way of ensuring a corporation eliminates discrimination in the workplace and pays a price for its unethical practices.

The question the court must answer is not whether there was discrimination but rather whether the allegations by the individual employees can be combined as a class-action. The court's decision will have sweeping legal ramifications, affecting all sorts of class-action suits, including antitrust, securities and product liability claims, according to The New York Times. It is likely that many pending class actions will come to a halt while the legal community waits for the decision. The court is slated to hear arguments this spring with a decision expected by the end of June.

"We are pleased that the Supreme Court has granted review in this important case," Wal-Mart said in a brief statement. "The current confusion in class-action law is harmful for everyone - employers, employees, businesses of all types and sizes and the civil justice system. There are exceedingly important issues that reach far beyond this particular case."

Brad Seligman, the head lawyer for the plaintiffs, said in a telephone interview after the court decision: "Wal-Mart has thrown up an extraordinary broad number of issues, many of which, if the court seriously entertained, could very severely undermine many civil rights class actions. We welcome the court's review of this limited issue, and we're confident that the core of our action will go forward."

According to The Wall Street Journal, the plaintiffs claimed that the retail giant's corporate culture is conducive to gender stereotyping and unfair treatment of women in all of Wal-Mart's 41 domestic regions. They alleged that the company's leaders knew of its backwards employment practices but failed to correct its discrimination against female workers.

In its defense, Wal-Mart said it has created an excellent work environment for women. The corporation said that the case should not be granted class-action status because the allegations are too varied to proceed together. Wal-Mart asserted it would be difficult to mount a defense against the hundreds of thousands disparate claims it would have to address in a single case, deeming it legally unfeasible.