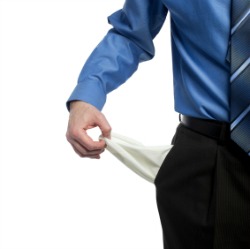 Four in five Americans will encounter poverty, joblessness or welfare at least once during their lives, reports a new survey. Some experts say that figure highlights a deteriorating economy and, perhaps, the end of the American Dream. At least one publication suggests that the survey is flawed, however, and might even hurt the nation's poorest citizens.

A new Associated Press survey finds that about 80 percent of Americans will live in or near poverty, or rely on public assistance at some point in their lives. According to MSNBC, this figure is much higher than in the latest U.S. Census, which reported that 15 percent of the country -- or about 46.2 million people -- are poor. The AP survey notes that Census figures are a snapshot of poverty in that given year, not tracking or accounting for those who move in and out of near-poverty or unemployment over the course of their lives.

The report comes just as President Obama looks to re-energize his economic agenda. "This growing economic inequality is not just morally wrong, it's bad economics," the president said last week in Galesburg, Illinois. "When the rungs on the ladder of opportunity grow farther and farther apart, it undermines the very essence of America -- that idea that if you work hard you can make it here," he said.

As for the ladder of opportunity, a 2010 study described wealth distribution in the U.S. as lopsided, according to MSNBC. The bottom 40 percent of the population owned just 0.3 percent of the country's wealth that year while the top 20 percent controlled 84 percent of it. Economist Steve Rattner told MSNBC that income inequality has been growing for 20 years due to globalization and various other factors. He said that while companies are earning record profits, that money is not trickling down to their workers. "The fact is that over the last three years, over a hundred percent of income gains in this country went to the top one percent," Rattner said.

But while the disparity between rich and poor Americans is growing, the racial economic divide is actually shrinking. RT notes that while non-whites still have a higher risk of economic insecurity, some of the biggest increases in poverty using the AP's calculation were among whites.

Of course, the AP study is not without its critics. MarketWatch suggested that the AP's definition of "poor" is too broad, and therefore misleading. For instance, under the guidelines -- which include anyone who has ever been unemployed, even new college graduates -- Mitt Romney would be a part of that 80 percent. MarketWatch proposed that over-inflating the estimate of U.S. poverty could undermine efforts to eliminate it since applying the "poor" label too frequently might cause some to discount it entirely.