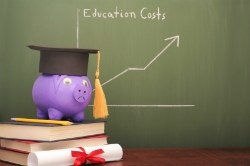 A new survey of nearly 204,000 high school students has found that the percentage of incoming college freshmen who enrolled at their first choice for college was the lowest since 1974.

The poll, titled "The American Freshman: National Norms Fall 2011," was administered by the Cooperative Institutional Research Program at the University of California, Los Angeles, and based on responses of full-time students at 270 institutions. As reported by The New York Times, the survey found that those who enrolled at their first-choice college dropped to just under 58 percent in 2011. Moreover, nearly one in five students who were accepted to their first choice opted not to attend.

Researchers noted that dwindling financial aid undoubtedly impacted students' choice of college. "When you look at those students, the primary thing that jumps out is cost and financial aid," explained John H. Pryor, director of CIRP and co-author of the study, who was quoted by the Times. "These students who were accepted and not attending are much more likely to say they are not going because they did not get the financial aid they wanted."

As Inside Higher Ed pointed out, the gap between acceptance to and enrollment at first-choice colleges was especially pronounced among first-generation students: About three-quarters were accepted, but only 55 percent attended. Among students whose parents attended college, however, 76.2 percent were accepted and 75.9 percent attended.

Economic concerns of students were also apparent in other parts of the survey. For example, 89.5 percent of students said that landing a good job is a very good reason for attending college -- the strongest response to that question in the four decades that it has been asked. In 2006, by comparison, the number was 70.4 percent. For many years, the top reason for attending college was "to learn more about things that interest me"; the concern about jobs has been number one since 2009.

"I think it's understandable," said Pryor, who was quoted in the Los Angeles Times. "Like everybody in the country, these students are reacting to a time of recession."