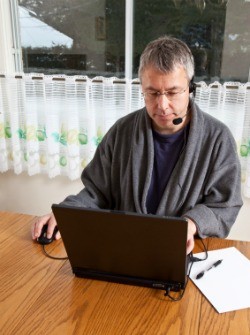 Proponents of telecommuting have long claimed that allowing employees to work from home cuts business expenses, improves worker productivity, and allows for more flexible work hours. But results of a new survey from CareerBuilder may cause some business leaders to question such an arrangement.

"With mass adoption of smart phones and advanced network technologies, telecommuters are connected to their offices like never before. As a result, we're seeing more companies embrace the work-from-home option and more workers putting in full-time hours while at home," noted Rosemary Haefner, vice president of human resources at CareerBuilder, in a news release. "However, to avoid situations where telecommuters aren't putting in the necessary time, managers need to be clear about expectations and establish daily objectives. The autonomy of working from home can be very rewarding so long as it doesn't diminish productivity."

In the survey, telecommuters listed the distractions they face working at home, with household chores, television, and pets ranking as the top three. Other distractions included errands, Internet, and children.

Regardless of the mixed results, many businesses are likely to continue to offer telecommuting as an option to employees, particularly small businesses with small budgets. As Small Business Trends reported, telecommuting can significantly cut costs for businesses by reducing overhead. In addition, telecommuting employees tend to take fewer sick and personal days, and companies that allow telecommuting often experience less turnover.

Moreover, past surveys have shown that telecommuting can be beneficial for both businesses and employees. In a 2009 Cisco survey of close to 2,000 telecommuters, for example, about 69 percent said they were more productive working from home, while 75 percent said the timeliness of their work improved. Sixty-seven percent of survey respondents said their overall work quality improved when telecommuting, and 80 percent said their quality of life improved.

"Cisco has long recognized that telecommuting and collaborative technologies are effective in breaking down separation barriers and enabling the transition to the borderless enterprise," noted Rami Mazid, vice president of Cisco's global client services and operations, in a Cisco press release. "In addition, as demonstrated by our recent study, a properly executed program for telecommuting can be extremely effective at unlocking employee potential by increasing work-life balance, productivity and overall satisfaction."