Survey Finds That Workers Often Go To The Office Sick 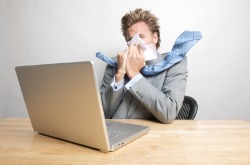 With cold and flu season in full swing, a recent survey has found that nearly three-quarters of workers typically go to the office when they are sick, a press release noted. Even more, workplace pressures to impress peers and superiors may play a significant role in causing employees to go into work under the weather--55 percent of workers reported feeling guilty when calling in sick.

The survey, conducted by job search website CareerBuilder, drew responses from more than 3,700 workers from November 15 to December 2, 2010.

With rising numbers of ill workers heading to the office, there is a greater chance of passing on germs to others. Fifty-three percent of workers said they have gotten sick from a colleague who came into the office sick, while 12 percent said they were infected by someone riding public transportation to or from work.

"It's important for employees to take care of their health and the health of others by staying at home if they aren't feeling well," said Rosemary Haefner, vice president of human resources at CareerBuilder. "Even if workers feel pressure to be at the office, they should talk to their managers about staying home if they are sick, or ask about other options such as working remotely. Most employers are flexible and understand that employees are more productive if they are feeling their best."

With regard to prevention measures, only 19 percent of employees said their companies provided flu shots at the office in an effort to foster a healthy workplace. Thirty-eight percent of respondents reported going to receive a flu shot by themselves this year. Seventy-eight percent said they washed their hands often to avoid sickness and 32 percent carry hand sanitizer and use it frequently.

According to MSNBC, some experts say that the reasons people are reluctant to miss work are not out of the ordinary; rather, social pressures and financial necessities motivate them to show up.

"A lot of people have social events they don't want to miss or they feel like they'd be letting people down," said Dr. William Schaffner, chair of the department of preventative medicine at Vanderbilt University. "For some, if they don't show up at work, they won't get paid and they need the paycheck. There are lots of reasons why people want to tough it out."

Health officials say there is a big difference between going to the office with mild cold symptoms and working with the flu, WRAL reported. According to a survey by the National Foundation for Infectious Diseases (NFID), 66 percent of people still go about their daily activities even when they are experiencing flu symptoms.

"The fact that they would knowingly go out while they're ill I think is a bit concerning," said Dr. Susan Rehm of the NFID.