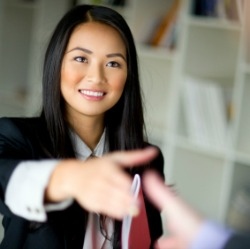 Do you have a big job interview on the horizon? A new survey suggests you may want to spend a little extra time brushing up on your jokes, reports Business First, especially when competing against equally qualified candidates.

The new survey from the job website CareerBuilder asked more than 2 thousand hiring managers what factors might get one hired when considering two equally qualified candidates. According to the results, 27 percent said a keen sense of humor would persuade him or her to extend an offer. A penchant for community involvement (26 percent), a sharp wardrobe (22 percent) and shared interests (21 percent) were also likely to result in an offer. UPI reports that other, less influential factors included being up to date on current affairs (8 percent), being involved in social media (7 percent) and being knowledgeable about sports (4 percent).

"When you're looking for a job, the key is selling your personal brand. Employers are not only looking for people who are professionally qualified for the position, but also someone who is going to fit in at the office," said Rosemary Haefner, Vice President of Human Resources at CareerBuilder said in a press release published on PR Newswire.

But just as certain characteristics can win one a job, others can cause one to lose one. According to the press release, these red flags include saying, "That's not my job" (71 percent), showing up to work late (69 percent) and lying (68 percent). Taking credit for other people's work (64 percent), leaving work early (55 percent) and gossiping (46 percent) can also dissuade a hiring manager from extending an offer. Crying at work (9 percent) and dating colleagues (8 percent) are much less likely to cost one a position.

This job schmoozing is not a short-lived affair: According to Haefner, one must continue putting forth a good impression long after accepting a position. "Employers will continuously assess personality, performance and behavior when considering prospects for promotions," she said. "You want to treat your current job like an extended interview for the next job you want in the company."

The survey was conducted between May 14 and June 5 by Harris Interactive, notes UPI.

"CareerBuilder Study Reveals Surprising Factors that Play a Part in Determining Who Gets Hired," prnewswire.com, August 28, 2013

"Want an edge trying for your next job? Tell a joke," bizjournals.com, August 28, 2013, Andrew Robinson