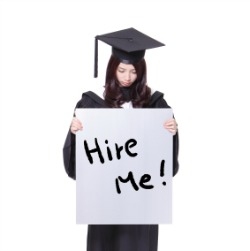 As a new class of college graduates prepares to enter the workforce, some might wonder how they feel about their educations, and how their academic experiences may translate into professional skills. According to a new survey exploring these and other issues, a full quarter of college graduate who participated in the study reported feeling completely unprepared for the career world, and colleges may be at least partly to blame.

The new survey released by Millennial Branding in conjunction with Internships.com provides insight into U.S. college students' views on education and the workforce. Among the findings: 25 percent of students enter the workforce feeling unprepared. The primary reason cited for this lack of preparation is internships, or, more specifically, not enough of them. According to the survey, 57 percent of students said internships are extremely important to the development of real world skills and for landing jobs after graduation, yet 52 percent said colleges do not provide sufficient access to them.

Even when students do secure internships, notes NBC News, they often earn little or no pay and may not get a job out of it. In a separate 2012 survey by Millennial Branding, 91 percent of employers said students should have one or two internships before graduating, but only half of them had actually hired an intern themselves within the previous six months. Most employers said they hired no more than 30 percent of their own interns, and 87 percent said their internships are shorter than what they would expect from the resume of one of their own job candidates. This is a concern in a job market in which individuals aged 20 to 24 face a 13 percent unemployment rate.

Another key issue explored by the 2013 survey is education and where the U.S. college system is heading. Overall, 53 percent of survey respondents said they believe online colleges are a reputable form of education, but only 43 percent thought an online classroom could equal or surpass a traditional one in terms of quality. Seventy-eight percent of respondents also said they believe it is easier to learn on a physical campus.

In a column he penned for Forbes, Millennial Branding founder Dan Schawbel said that despite their preference for classroom-based learning, many students said they appreciate that online learning can help them balance work and class, give them more flexibility in their assignments and lower education costs. These factors could be important in the U.S. higher education system, which he said is "broken" by high tuition, stagnant unemployment and a persistent career skills gap. Those who go to college can no longer expect to get jobs right out of school, he said, and graduates must often work in service, retail, or a field outside of their academic focus.

"Our school system needs to adjust to fit the new economic reality," wrote Schawbel. "As the world becomes more virtual, it will lower costs and allow more students who couldn't afford education or don't want to deal with outrageous student loans to educate themselves."

"Millennials Believe The Future Of Education Will Be Virtual," forbes.com, June 11, 2013, Dan Schawbel