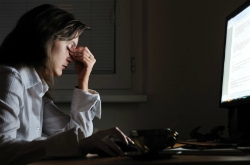 A new survey has confirmed what many people have been feeling all along: Employees have been working more hours than ever over the past three years.

The poll of over 200 companies in the United States and nearly 100 companies in Canada was conducted by global professional services company Towers Watson. Sixty-five percent of respondents reported that employees have been working longer hours since the recession began and more than half said they expect the trend to continue over the next three years. In addition, 31 percent reported that their employees had taken less vacation and personal time over the past three years.

That's concerning news for both employees and businesses, said Laurie Bienstock, North America leader of rewards consulting at Towers Watson. "In the short run, having employees work extra hours can increase productivity," she said in a news release, "but in the long run, extended hours can negatively affect employee well-being and retention."

Ryan Johnson, vice president of research for the global human resource association WorldatWork, agreed. "Employees generally don't mind doing more with less, especially when economic conditions are tough," he said in the news release. "But when this drags into multiple years, and they start to hear anecdotes of recovery, they become less understanding. At that point, the entire employee value proposition is crucial to retention."

As reported by Life Inc., the survey showed that bosses are aware that working longer hours is not easy on employees. A little more than half of U.S. employers and a little less than half of Canadian employers said they knew that increased hours were negatively affecting employees' ability to maintain a healthy work/life balance.

Part of the reason for the decline in income may be that people being rehired are more willing to take pay cuts in order to secure some sort of employment. Henry S. Farber, an economics professor at Princeton found in a separate study that people who lost jobs in the recession and later found work earned an average of 17.5 percent less than they did in their previous jobs.

"As a labor economist, I do not think the recession has ended," he was quoted as saying by the Times. "Job losers are having more trouble than ever before finding full-time jobs."

"Yes, You Are Spending More Time at the Office," lifeinc.today.com, October 11, 2011, Allison Linn