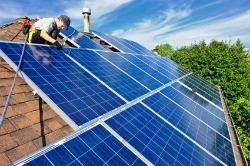 A recent survey by The Solar Foundation showed an increase in U.S. solar jobs over the past year.

The Solar Foundation released its findings last week at a solar power event held in Dallas, reported RenewableEnergyWorld.com. Nearly 10 times more jobs had been added in the industry over the past year compared with general employment as a whole. The Solar Foundation indicated that more than 100,000 people were employed in the solar industry sector nationwide as of August 2011.

"We expect even greater growth in the foreseeable future," Andrea Luecke, executive director of The Solar Foundation, was quoted as saying in GetSolar. "But policymakers, workforce training providers and the industry must work together to continue creating good jobs for skilled workers."

However, growth in the field over the past year was actually anticipated at 26 percent and so came in lower than expected, noted Luecke in RenewableEnergyWorld.com. Still, the resulting growth did beat out that of the overall economy, which added jobs at a growth rate of 0.7 percent over the past year.

California leads the U.S. solar industry in terms of numbers of workers employed in the field (more than 25,000), according to GetSolar, but other states--such as Arizona, Colorado, and New Jersey--that have invested in the solar power industry, also had workers that numbered in the thousands. Other states listed in the top 10 in terms of solar field employment included Florida, Massachusetts, New York, Pennsylvania, Oregon and Texas, according to Bluffton Today.

Thirty-two percent of respondents to The Solar Foundation's survey listed the overall poor health of the U.S. economy as one factor that could impede potential growth. Another 21 percent listed loss of solar-incentive programs as problematic, according to GetSolar.

"You know we are undergoing the worst recession since the Great Depression," Luecke said in RenewableEnergyWorld.com. "We have 14 million Americans out of work and million upon millions more either discouraged or underemployed and people are afraid."

The report had officials in some states wondering why they don't have higher employment in the field. One such state was South Carolina with 187-miles of sun-kissed coastline, according to the Bluffton Today. However, a number of factors are perceived as impediments there. These include lack of incentives, entrenched utility companies, and current inexpensive non-renewable energy rates.

"We are cursed and blessed with cheaper energy," Bruce Wood, owner of Sunstore Solar in Greer, South Carolina and chairman of the South Carolina Solar Council, is quoted as saying. "So, we're not highly motivated."