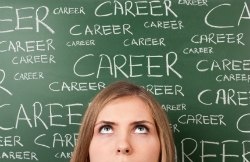 A recent study showed that many college students do not do enough to prepare for the post-college job search. According to the survey, students were failing to aggressively prepare by not taking advantage of technology and networking opportunities.

Millennial Branding, a research and consulting firm, and StudentAdvisor.com queried more than 200 U.S. college students in August 2012 for "The Student Career Development Study." Many of the students surveyed did intend to enter the workforce after college, but needed to work on their job hunting skills. For example, only a third had LinkedIn profiles and just 29 percent had gone to their school's career services center for guidance.

"Part of the reason why students are struggling to find jobs is because they fail to develop their careers while in college," said Dan Schawbel, founder of Millennial Branding, in the study. "Students should strive to market themselves online through social networks, and actively network offline, in order to secure internships and jobs."

When it came to marketing themselves, about 93 percent of the survey respondents did not understand what it meant to create a personal brand, and only 20 percent said they had taken or would consider taking classes teaching social media skills. Furthermore, the bulk of these students did have Facebook accounts, but far fewer maintained a presence on other social media sites such as LinkedIn, Pinterest, Instagram or WordPress. Schawbel told Business Insider that despite college students' technological smarts, they are not necessarily using technology and social networking to their advantage.

"They don't understand personal branding," he told Business Insider. "They see [social media] as something more social and personal and more for their families and friends."

Millennial Branding's report also revealed the lack of networking among students: Only 22 percent belonged to a professional development or industry-related group. Although 85 percent believed an internship was important, just 40 percent of students had had one internship. Moreover, while 70 percent of surveyed students said they had a least one mentor, 37 percent indicated that their mentor was a parent. Schawbel recommended to Business Insider that students should find a mentor other than a parent because that person can provide more perspective and give specific rather than broad guidance.

Schawbel also suggested to Forbes some basic steps college students could take to ready themselves for the future. These include creating a LinkedIn account, setting up a WordPress blog and finding an internship as early as possible. He also stressed the importance of having a mentor in the same field.

"You've got to find someone who is doing what you want to do," he told Forbes.

"Students Are Unprepared For The Job Market Because Their Parents Are Their Mentors," businessinsider.com, November 12, 2012, Vivian Giang