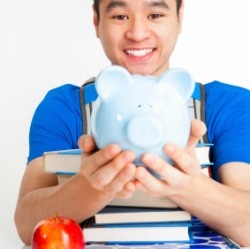 For many students, college is no longer the carefree party life you typically see in movies. Now, many college students have taken on more financial responsibilities and most are working while in school to make ends meet. A new survey released by Citigroup and Seventeen magazine found that nearly 4 out of 5 college students are working an average of 19 hours a week while in college.

According to a press release, this finding is from the 2013 College Student Pulse, a national survey of 1,008 high school seniors and college students that looked at how students spent as well as managed their money while in college. The survey found that students are relying less on their parents and playing a larger role in funding and managing the cost of college. For instance, 62 percent of students said they have a budget in order to track expenses and 77 percent said their pay for their own credit card bills. The average student spent $513 on back-to-school shopping, with male students spending an average of $246 more than female students. Unsurprisingly, freshman students tended to spend the most on back-to-school items.

Many students reported that they covered most of their own college expenses, including clothing, books, transportation to and from school and food. The only expense that parents were significantly more likely to cover is students’ monthly cell phone bills.

As The Huffington Post pointed out, these findings are in line with a recent Sallie Mae report that showed that parents were using less of their own income and savings to pay for kids’ college costs.

“Kids used to rely on the bank of mom and dad,” said Linda Descano, a managing director at Citi in MarketWatch. “So many families are trying to work themselves out of the financial impact of the Great Recession.”

Indeed, the press release noted that a majority of students are doing a number of things to cut back on expenses, such as taking advantage of student discounts, purchasing used books or renting textbooks, grocery shopping instead of eating out, walking or biking instead of driving a car and working more hours for a bigger paycheck.

The money earned and saved, however, often went towards other expenses, rather than tuition. According to the press release, 41 percent of respondents said financial aid covered the cost of tuition and 16 percent said they used scholarships. Twenty two percent said their parents paid for tuition and just 18 percent of students reported paying tuition themselves.

“In many cases, students work to get spending money, not necessarily to pay college bills,” explained Mark Kantrowitz, publisher at student-marketing company Edvisors Network, in MarketWatch.

Despite the rising cost of college, however, The Huffington Post reported that 94 percent of students said college was a good investment. Though the increased financial responsibility might be stressful, MarketWatch noted that students playing a larger role in funding and managing college costs is actually a good thing.