Survey Shows Despite Challenges, Veterans Are Satisfied With College Experiences 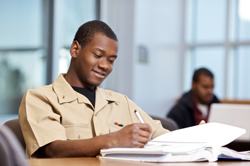 According to The Washington Post, military veterans feel they receive lower levels of campus support than their non-veteran peers. Veterans also interact less with instructors and are less likely to hold internships or study abroad.

The National Survey of Student Engagement (NSSE), which is done each year by the Indiana University Center for Postsecondary Research, analyzed responses from approximately 362,000 freshmen and seniors at 564 U.S. colleges and universities, reported Inside Higher Ed. The survey looked at study and classroom habits of all students; however, this was the first time, in its 11-year history, the survey closely examined the experiences of student veterans.

As The Chronicle of Higher Education pointed out, 11,000 self-identified veterans were polled, most of whom were older and male. While most veterans studied for just as many hours as their non-veteran peers and showed the same level of overall satisfaction, they seemed to interact less often with instructors and reported less "reflective learning", which the survey defined as the practice of examining the strengths and weaknesses of one's own beliefs or trying to understand an issue from an outside perspective.

Michael Dakduk, deputy executive director of Student Veterans of American, told The Washington Post that many student veterans find it difficult to fit in on a college campus. Veterans are more likely to be transfer, part-time or online students, so interacting with peers and faculty can be a challenge. Furthermore, one in five combat veterans has a disability, compared to one in 10 non-veterans. Veterans also have more responsibilities outside of the classroom such as work or caring for dependents. According to The Chronicle of Higher Education, combat veterans who were full-time freshmen spent twice as much time working and six times as many hours taking care of a family member as their non-veteran classmates.

While just 3.4 percent of respondents were veterans, Inside Higher Ed pointed out that the percentage is likely to increase as more veterans take advantage of the Post-9/11 GI Bill.

"[The data] suggests that veterans have some distinctive needs and that colleges need to make an effort to meet them," said Alexander C. McCormick, survey director and professor at Indiana University School of Education. James Selbe, assistant vice president of lifelong learning at the American Council on Education, added that engaging student veterans and providing them with supportive services "is especially important for first-time, first generation student veterans who are coming from a military environment where learning is focused not on engagement but on demonstrating specific competencies".

The Chronicle of Higher Education reported that the survey also found that students' majors affected the way they learned and interacted with professors. For example, business administration students do more class presentations and group projects. Nursing and physical education majors are more likely to participate in service learning. English majors tend to discuss ideas with professors outside of the classroom. Internships are most common among education and journalism students and least common among accounting and business administration majors.

According to Inside Higher Ed, the NSSE data is usually shared internally at institutions and is used to improve student support services and other campus resources.