Survey Shows Employees Will Be Working Over The Holidays 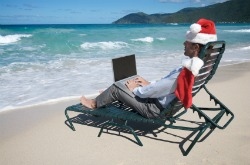 A new survey conducted by work environment consulting firm Regus reveals that most U.S. workers will be slaving away between Christmas and New Years Day, much to their families' chagrin. But while working is one matter, productivity is quite another.

According to The Wall Street Journal, the survey of more than 12,000 employees worldwide found that 64 percent of U.S. employees will be working the week between Christmas and New Year's, with 56 percent actually making the commute to the office.

"Economic uncertainty and a slow growth marketplace continue to put pressure on businesses to keep full steam ahead, so it is not surprising that workers plan to use this time to catch up on unfinished work," Regus's CEO Americas Guillermo Rotman is quoted as saying in a press release posted on Pitch Engine.

Even those supposedly on vacation, however, won't really be away. According to Fresh Business Thinking, of those respondents taking time off, 71 percent intend to check work emails regularly on their mobile devices over the holiday break.

"It is ironic that the very technology that affords us flexibility and freedom from the traditional fixed office set-up also blurs the distinction between work and home life," said Regus Regional Director Celia Donne in Fresh Business Thinking. "Stress and burn-out are very real threats."

So who takes the prize for putting in the most hours? The Los Angeles Times notes that 69 percent of L.A. workers will be working voluntarily this year, more than in any other major city. Philadelphia, with 68.8 percent, is a close second, followed by those in the Dallas-Fort Worth area and Chicago. Small business employees will also be burning the holiday oil--68 percent of those working for companies with fewer than 50 employees will put in holiday hours compared to 59 percent at mid-size firms and 49 percent at larger organizations.

But while the majority of U.S. workers will be working this holiday season, not all will be productive: The Wall Street Journal reports that just 39 percent of respondents expect to actually do much work.

While working over the holidays may impress employers, it won't get much credit at home. According to Fresh Business Thinking, 27 percent of respondents note that holiday work has caused "serious upset" for family, friends or partners in the past.

"Our research suggests many people are not taking full advantage of the Christmas break and, if they are also travelling into the office to work, are unnecessarily squandering precious time with their loved ones," Donne said.

According to Fresh Business Thinking, however, 60 percent of respondents say they plan to take more vacation next year.

"More holiday shifts for Los Angeles employees than in other cities," latimesblogs.latimes.com, December 19, 2011

"Working Through the Holidays, Sort Of," blogs.wsj.com, December 19, 2011, Melissa Korn