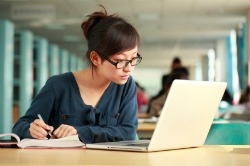 Full-time college engineering majors study the most and business and social science majors the least, according to a recent survey measuring how hard and effectively students are working.

According to USA Today, the annual National Survey of Student Engagement was based on responses from 416,000 college freshmen and seniors at 673 U.S. colleges and universities. It grouped students into seven academic major fields.

Students on average said they studied at least 15 hours a week, reported Inside Higher Ed. Almost half (42 percent) of engineering students said they studied 20 or more hours per week, the most of any group, The New York Times noted. Next, in descending order, were students with majors in physical sciences, biological sciences, arts and humanities, education, social sciences and business. As USA Today noted, social science and business majors studied 14 hours on average a week.

"Business and education students are more likely to be older students," said Alexander C. McCormick, director of the survey and a professor of education at Indiana University. "We see a fair number of older students trying to do it all--going to school, working and having families."Of the full-time seniors who spent at least 20 hours per week studying, engineering students (22 percent) were most likely to attend class without completing their homework, noted Inside Higher Ed. This compares to an average of 14 to 16 percent of students in other majors.

For the most part, the time students spent studying mirrored instructors' expectations. The only exception was in social science, where students studied four hours less than professors expected each week.According to The New York Times, the survey also revealed that students did not use effective techniques when studying, such as reviewing class notes later on or taking notes while reading. Furthermore, some 30 percent reported that they do not seek assistance when they do not understand course material.

"There's a growing movement in the last 10 years or so of colleges explicitly teaching students how to be good students," said McCormick to The New York Times. "But too many of our institutions still just assume that students show up knowing it already, or that they'll figure it out, and too many of them never do."