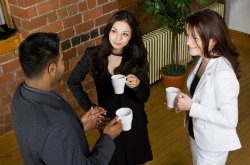 Yakking with co-workers, dealing with computer issues and using social media are the top three time wasters at work, according to a survey released Thursday by TrackVia, a cloud-based application developer located in Denver.

According to a press release, the study questioned 300 non-executive employees across the U.S. who use computers and software every day in their work. Fourteen percent of respondents said chatting with peers was their top distraction on the job, reported ABC News. Eleven percent said they wasted the most time handling computer and software problems while five percent pinpointed checking and posting on Facebook, Twitter and other social media sites as comprising their unproductive time.

Meetings, too, are a problem, said working professionals, according to Life Inc. Of those who attended them as part of their jobs, 37 percent said at least half their time in meetings was unnecessary. Furthermore, nearly 21 percent of employees indicated they were in meetings for a total of three-plus hours per week.

"A lot of people feel like they spend their entire day in meetings," said Laura Stack, a Denver-based speaker and author who conducts productivity training sessions.

Clarifying misunderstandings with co-workers was yet one more time killer, the survey showed. Fifteen percent of respondents admitted spending one to two hours a week on clearing up communications with others while an additional seven percent indicated that took up three or more hours of their work week.

In terms of whether or not rules were a help or hindrance to workers' productivity, the survey revealed employees found them useful. In fact, 11 percent claimed policies and procedures greatly increased their work output, and only two percent said they greatly decreased it.

How much time are workers squandering overall? The survey showed that a little more than half (51 percent) of respondents said they waste up to two hours per week, according to Life Inc. while 11 percent admitted spending six to nine hours a week on non-work activities. Nearly four percent fritter away an astonishing 10 to 19 work hours per week on non-work activities.