Survey Shows Incivility In The Workplace Is Increasing 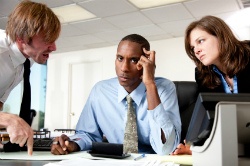 Wondering why your colleagues have been short with you? Or why your cubemates don't chat as much? It could be because workplace incivility is on the rise.

USA Today reported that new research conducted by Indiana Wesleyan University shows that 75 to 80 percent of people have experienced workplace incivility, defined as "a form of organizational deviance... characterized by low-intensity behaviors that violate respectful workplace norms, appearing vague as to intent to harm." In other words, people at work are just plain rude.

"It's a growing and prevalent problem," said Jeannie Trudel of Indiana Wesleyan University-Marion.

Indeed, CBS News reported that while 86 percent said they have experienced incivility, 90 percent admitted to instigating it.

So why all the hostility at work? Many experts believe it is a result of stress and with so many employees still worrying about layoffs and working harder to keep their jobs, as well as taking on the jobs of those who have been laid off, stress is high at most offices.

"It's not surprising that incivility is on the rise because, when people are stressed and they're in triage mode all the time, the first thing that goes by the wayside is people saying 'thank you' and 'please'," said Elizabeth Fenner, assistant managing editor of Money Magazine.

Psychologist and CBS "Early Show" contributor Dr. Jennifer Hartstein added, "(Workers are) really not paying attention to their interpersonal skills. They're just focusing on how to get the job done. And it doesn't really matter who they steamroll in the process."

Sue Jacques, a corporate etiquette consultant who calls herself "The Civility CEO", told CTV News that workers are also more competitive than before, which causes even more tension.

"We're in a get-it-done and get-it-done-fast kind of society now where we have to prove that we can beat the other guy. It's very competitive," said Jacques.

Increased competitiveness and a desire to advance one's career can also cause workers to move from job to job more frequently, which makes it difficult to get to know your colleagues and build meaningful relationships with them.

When asked who is to blame, public relations firm Weber Shandwick found that 65 percent of employees said leadership is at fault, while 59 percent blamed employees and 46 percent pointed fingers at the economy, reported CBS News. Furthermore, USA Today reported that 67 percent thought there was a "critical need" for civility training.

Regardless of who is at fault, CTV News noted that workplace incivility can be costly. Employees who work in a hostile work environment usually take more sick days and have less loyalty to their employers, both of which can negatively affect productivity.