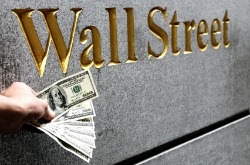 Some business executives have never been beyond reproach when it comes to questions of ethics and financial success, but a new study reveals that some surveyed think ethical shortcuts are necessary and sometimes worth it if they are not caught.

The study, conducted in June, queried 500 financial services executives located in the U.S. and the United Kingdom, according to a press release from Labaton Sucharow, the whistleblower law firm that conducted the study. A full 24 percent of respondents admitted that financial professionals may need to participate in illegal or unethical behavior to reach success while 26 percent said they had seen or been aware of such activities firsthand (U.S. respondents indiciated they were slightly less likely to partake in unethical rule-breaking compared with those in the UK -- 22 percent versus 25 percent, the study shows). Another 16 percent indicated they would partake in insider training if there were no criminal ramifications.

Such results bring the integrity of the financial system into question, according to Jordan Thomas, partner and chair of the Whistleblower Representation Practice at Labaton Sucharow.

"When misconduct is common and accepted by financial services professionals, the integrity of our entire financial system is at risk," he said in the press release. "In this era of corporate scandals, we must refocus our energies on corporate ethics and encourage individuals to report wrongdoing -- internally or externally."

Some respondents indicated that the pressure to act unethically came from the financial incentives to advance: 30 percent said their compensation plans placed pressure on them to succeed, reported Reuters. The study's release came at a time when several banks are being investigated as part of large probe and also while Barclay's (in the UK) faces scrutiny regarding a rate-rigging scandal.

According to Forbes, the survey also revealed that just 55 percent could say with definitiveness that they would not partake in insider trading when such an act could net them $10 million when there was no chance of arrest. At the same time, the survey showed that 94 percent of financial executives would likely divulge such information under the Security and Exchange Commission's whistleblower program, but less than half were familiar with the program's details. Respondents also indicated that they felt they could suffer from retaliation for whistle-blowing with U.S. women most likely to indicate fear of retaliation.

"Education is the answer," wrote the study authors. "We must do a better job of bridging the gap between the regulators and industry… Until we begin a robust dialogue about corporate integrity -- the extent to which it doesn't exist and the extent to which it must -- we cannot create significant and lasting change within the financial services industry."

"Financial Services Professionals Feel Unethical Behavior May Be a Necessary Evil and Have Knowledge of Workplace Misconduct, According to Labaton Sucharow Survey," labaton.com, July 10, 2012