Survey Shows Video Job Interviews are on the Rise 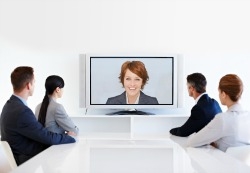 There's more than one way to interview for a job, and new survey results released by OfficeTeam, a division of Robert Half International, Inc., suggest a rise in the use of video technology for distance interviews.

"Many companies are embracing video interviews, which are often conducted online via webcam, as a way to quickly and cost-effectively evaluate applicants," said Robert Hosking, executive director of OfficeTeam, in an OfficeTeam press release. "Job seekers can use these virtual meetings to put their best foot forward, just as they would in person."

The survey, actually done by an independent research team, was based on phone interviews with human resource managers of companies employing staff numbering 20 or more. The 500-plus managers interviewed revealed that trends in the HR world can change quickly over a year.

For example, results from this year's study show that 63 percent of companies have used video technology to conduct interviews compared with just 14 percent the year before, according to OfficeTeam. More specifically, 53 percent of HR managers said they used video technology to conduct interviews "very often" while just 1 percent responded this way a year ago.

Yet, there are still hold-outs on the video-interviewing model. A full 25 percent of interviewed HR managers responded they "never" conduct video interviews. While this still comprises a quarter of all those surveyed, it also represents a drop from last year when closer to a half -- 42 percent -- said they "never" do video job interviews.

If candidates are preparing for a video job interview, they may want to keep a few things in mind. This includes setting up the computer and related equipment in an office or clean space -- not in a busy cafe or the playroom of a house, for example. Candidates will also want to dress professionally for the video interview.

"Dress and groom (as) you would for any face-to-face interview," said Justine Lisser, a senior attorney adviser in the Equal Employment Opportunity Commission's Office of Communications, in Life Inc. "(The) first impression is key, so I would always be over-prepared and suit up."

There are many other tips to follow. First, users will want to check on their computer equipment and make sure they know how to handle any complications, should they arise. They might also want to conduct a test run with a friend or family member to make sure their video and audio equipment is properly functioning and to gauge how close to sit to the camera in order to ensure adequate visual and audio contact, reported BusinessNewsDaily.

As in any interview, potential candidates need to be well-prepared to answer questions and also have a list of their own follow-up questions. And, just like they would do following a face-to-face interview, candidates will want to express their thanks for the interview opportunity with a follow-up note.