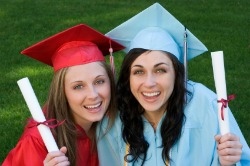 Women, who have been surpassing men in college enrollment and completion, have a more positive view about the value of higher education.

According to a Pew Research Center survey of 2,142 U.S. adults ages 18 and older, half of all female college graduates gave the country's higher education system excellent or good marks when asked about the value it provides given the cost. Men, on the other hand, were less likely to give such feedback--just 37 percent of male graduates gave U.S. higher education good marks. Furthermore, women were more likely than men to say that college helped them grow intellectually (81 percent of women versus 67 percent of men) and personally (73 percent versus 64 percent).

The Washington Post reported that while most respondents said a college education was useful, 77 percent said it was more central to a woman's success, while 68 percent said that about men.

The public had mixed feelings about the gender gap in education. A majority of respondents said it was a good thing that more women than men are completing college. However, when the same question was rephrased, respondents said that it was a bad thing that fewer men than women are graduating from college.

"The public has mixed views about this," said Kimberly C. Parker, associate director of the Pew Social and Demographic Trends Project and a co-author of a report on the survey, to The Chronicle of Higher Education. "They're supportive of all the accomplishments of women in this regard, but they don't want to see that success come at the expense of men."

Race and ethnicity seemed to play a part in these attitudes. With the greatest divide between women and men in higher education, less than half of African American respondents viewed higher enrollment and completion rates for women favorably. Fifty four percent of whites, on the other hand, said it was a good thing; as did 59 percent of Hispanics.

The survey was conducted March 15-29, 2011 via landline telephone and cellular phone.