Swearing at Work Can Hurt Your Career 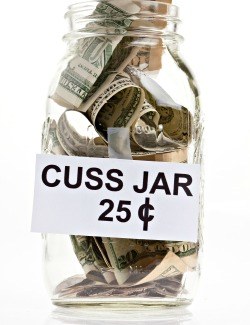 For many individuals, blurting out the occasional curse word at work is no big deal. However, a recent CareerBuilder study reveals that employees should think twice before swearing on the job.

A survey conducted by Harris Interactive for CareerBuilder notes that a majority of employers do not look favorably upon employees who use foul language at work. Researchers surveyed 2,298 U.S. hiring managers and human resource professionals and 3,892 full-time U.S. workers who are 18 years of age or older.

Survey results were also broken up by demographics. Men were more likely than women to curse at work (54 percent versus 47 percent). The youngest group of surveyed individuals, aged 18-24, was the least likely to swear at work, while individuals aged 35-44 were the most likely.

What are the implications of cursing at work? 64 percent of surveyed employers mentioned that they would think less of an employee who repeatedly swears, and 57 percent said that they would be less likely to promote someone who curses in the workplace. Business Insider additionally notes that according to 81 percent of employers, using foul language at work is unprofessional. Other employers believe it reflects a lack of control (71 percent) or lack of maturity (68 percent). 54 percent mentioned that swearing makes workers seem less intelligent.

As Rosemary Haefner, vice president of human resources at CareerBuilder, tells Forbes, "Many employers value professional decorum, and when a worker swears it can be seen by managers as a violation of this code," particularly when a third party such as a customer or client is present.

Haefner explains that even at companies with more relaxed workplace cultures, "...there may be someone in a position of power who doesn't voice their unfavorable views of swearing immediately, but takes it into consideration during annual reviews or promotion time."

Business Insider also notes that despite employers' negative opinion of employees who curse at work, 25 percent of surveyed employers admitted that they have sworn at employees.

Why do people swear at work? Haefner tells Forbes that the main reasons are stress, habit, and organizational structure. Individuals likely swear most often when they have high levels of stress and tension. Others may carry over their tendency to swear at home or in social settings to work, or they may work in an organization where the culture is so relaxed that employees swear "without anyone batting an eye."

Haefner offers workers advice in determining what is and is not appropriate language for the workplace: "The most important thing is to be mindful of your surroundings and understand the culture of your organization. Self-awareness can go a long way to rooting out bad habits."