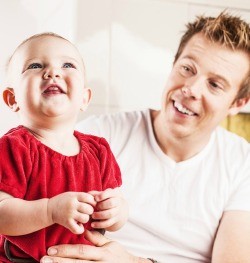 Successful women such as Yahoo!'s Marissa Mayer and Facebook's Sheryl Sandberg have perhaps inspired a renewed national debate on the state of gender equality in the U.S. workforce. Slate mentioned that one point of contention for many equality advocates is that American women are not ensured any amount of paid maternity leave. They often point to countries such as Sweden, where men and women lead the world in paid paternal leave -- as examples to follow. Now, a new study suggests that work-life balance in Sweden may be more complicated than many are inclined to believe -- especially for working dads.

But what about Sweden, where laws aim to level the work-life balance? According to the study, Swedish men actually report more nonwork-work and work-nonwork interference than Swedish women do. When they are working, they feel pressure to attend to family concerns. Work, then, spills into the home.

There are likely a number of potential theories, but Dr. Leah Ruppanner, a sociology professor at the University of Melbourne, told Slate that she believes societal pressures are a likely factor. She said Swedish women may expect men to contribute more at home because they feel they have societal support to do so. "Swedish men may not be able to opt-out of childcare responsibilities while at work," as men in places such as the U.S. do, she said.

Another potential factor is that men in Sweden still make more money than women, so they feel obligated to work more to provide for their families. Also, though men and women have the option of taking equal time for maternity and paternity leave, women still take 75 percent of a couple's available shared leave. That means that in early childhood, when dads are perhaps expected to be most hands-on, they are also expected to work more than their partners.

Work-life balance is not the only challenge facing new fathers in Sweden. According to the Swedish news publication The Local, a new study from the Karolinska Institute found that men in Sweden are just as likely as Swedish women to experience the so-called "baby blues," or depressive symptoms after the birth of a child. By comparison, a 2009 article from The New York Times noted that studies show U.S. and U.K. men can also suffer from this type of depression, but it is much less prevalent among them than women. Up to 80 percent of women experience a small degree of sadness after having a baby, and 10 percent experience severe postpartum depression. However, according to a 2005 study by Dr. Paul Ramchandani, a psychiatrist at the University of Oxford, only an estimated 4 percent of men experienced serious depression within 8 weeks of their child's birth.