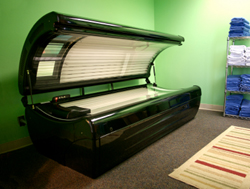 The Melanoma Foundation of New England started the Your Skin Is In campaign, which is a no-tanning pledge contest at colleges and high schools throughout New England, reported a press release.

"If you use a tanning booth once a month before the age of 35, your chance of getting melanoma increases by 75%. Not only that, melanoma is the second most common cancer in teens and young adults ages 15-29," said Kelli Pedroia, spokesperson for Your Skin Is In.

Despite warnings, most students are unaware of the consequences of indoor tanning and often believe that a glowing tan is more attractive.

"I wanted to look good and have that darker skin color," said Samantha Hessel, who started going to tanning salons her freshman year of high school, to CNN. "I think society makes you feel being tanned is prettier than being pasty white." By her freshman year of college, Hessel found out she had melanoma--the most dangerous type of skin cancer.

As CNN pointed out, the tanning industry targets students by offering packaged deals and student discounts, usually before prom and spring break, when young adults want to look their best. However, many salons offer student discounts year-round as well.

"About 75 percent of our customers are students," said Janet George of Ultimate Tan, a tanning salon near Keene State College, to The Equinox. Another popular salon near the KSC campus offers unlimited tanning packages and said the majority of its customers are also college students.

Furthermore, CNN noted that many salons also attract customers with claims that ultraviolet rays are a healthy source of vitamin D. Most students believe the so-called benefits and are usually happy with results.

"It hides your pimples," said Hessel. "It makes you feel like your skin looks less imperfect, a little bit."

Dr. Jennifer Holman told The Apache Pow Wow, "It's true that [tanning] may help the production of Vitamin D in the body but most people on a healthy diet should have no problem concerning Vitamin D. Also, the same chemicals produced in the body while tanning are the same ones produced while exercising."

"High School and College Students Pledge to Stay Out of Tanning Beds for Their Proms and During Spring Break," PRNewswire.com, February 28, 2011