Tattoos Still Taboo, But Maybe Not For Long 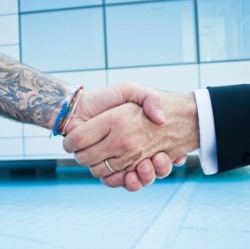 New research from the UK showed that tattoos are still a stigma in the workplace and could negatively affect your chances of landing a job. However, not all tattoos are bad and the negative connotations may soon be a thing of the past.

As reported by ScienceDaily, Dr. Andrew R. Timming of the School of Management at the University of St. Andrews in Scotland interviewed 15 hiring managers from 14 organizations in mid and southern Scotland. The types of organizations varied, with managers from a hotel, bank, city council, prison, university and bookseller. According to feedback from interviewees, visible tattoos were a stigma and hiring managers said they would hesitate to hire someone with visible ink. The concern, however, was more about how their organization would be perceived by customers interacting with tattooed employees, rather than a concern over tattooed employees' work ethic or abilities. According to management-issues.com, even hiring managers who did not personally object to tattoos still said that they worried that having employees with visible body art would tarnish their corporate image. One hiring manager said that tattoos made a person "look dirty".

"Hiring managers realise that, ultimately, it does not matter what they think of tattoos. What really matters, instead, is how customers might perceive employees with visible tattoos," said Dr. Timming, as quoted by management-issues.com.

Not all body art was perceived as negative, however. According to ScienceDaily, hiring managers were comfortable with tattoos that could easily be concealed by clothing. In fact, three of the hiring managers that Dr. Timming interviewed had concealed tattoos themselves.

Certain types of tattoos also appeared to be more acceptable than others. For example, management-issues.com pointed out that innocuous body art, such as flowers or butterflies, were not perceived as negative. Military insignia were also acceptable and, in fact, were viewed as badges of honor. Any body art that included or suggested sexual context, drugs, racist innuendos, death or violence were not tolerated.

"If it's gang culture-related you may have a different view about the tattoo than if it's just because it's a nice drawing of an animal that they've done on their arm," said one hiring manager, as quoted by ScienceDaily.

Management-issues.com also noted that body art could be desirable for certain jobs. An HR manager at a prison, for instance, said that body art on guards sometimes helped them connect with prisoners.

Overall disapproval for visible tattoos may soon be a thing of the past. According to ScienceDaily, most of the hiring managers that Dr. Timming interviewed agreed that body art would gain wider acceptance in the "not-so-distant future".

"Several respondents pointed out that intolerance to tattoos is currently strongest amongst the older generations," said Dr. Timming, as quoted by ScienceDaily. "That, coupled with the increasing prevalence of tattoos in younger people, points to a future in which body art will become largely normalised and accepted."

Indeed, management-issues.com noted that one in five people in the UK now have some sort of tattoo. Slightly more Americans have tattoos -- according to The Huffington Post, a Pew Research Center study found that approximately 23 percent of Americans today have a tattoo and 32 percent of 30-45 year olds have at least one.

Still, Dr. Timming emphasized the importance of choosing a tattoo carefully, especially if it will be visible. He suggested selecting body art that would not be viewed as distasteful by not only hiring managers but colleagues and customers as well.

"Tattoos Reduce Chances of Getting a Job," sciencedaily.com, September 4, 2013