Teach For America Initiative and Other Opportunities for Veterans 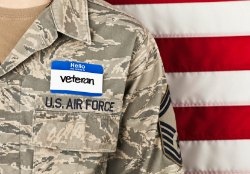 With Veterans Day just around the corner, Teach For America announced its first veterans recruitment initiative.

"This program enables America's new greatest generation of veterans to continue to serve their country after coming home from war," said Paul Rieckhoff, founder and CEO of Iraq and Afghanistan Veterans of America, in the press release. "Teach for America is giving veterans the well-deserved opportunity to transition into meaningful careers in the civilian workforce."

This year, Teach For America has 10,000 teachers to some 750,000 students in 46 regions across the U.S. Seventy nine veterans joined this year and spoke highly of their experience.

"My military experience has played an integral role in my ability to invest students in their own education," stated LaDerrick Collins, a 14-year veteran of the U.S. Army who is now teaching in Kansas City, in the press release. "Soldiers are required to do whatever it takes to get a job done. I've found teaching to be no different."

The initiative is not without its critics, however. As The Huffington Post noted, some have argued that Teach For America's recent recruiting programs have pushed its teachers into charters, which goes against the organization's mission.

"When I first entered TFA, we wanted to be on the front lines. We wouldn't have accepted a job teaching in a school that was doing well," explained alumnus Gary Rubinstein, as quoted by The Huffington Post. Rubinstein now teaches at a high-performing New York school.

In related news, U.S. News & World Report, highlighted scholarship opportunities for veterans transitioning to civilian life. A number of scholarships and financial aid opportunities are available to veterans and their families, including the GI Bill and Post-9/11 GI Bill, The American Legion's Nontraditional Student Scholarship and The Veterans United Foundation Scholarship Program. Members of the Military Order of the Purple Heart may also be eligible to receive scholarships from the organization.