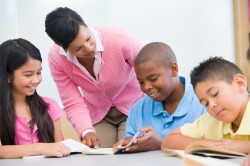 Teach for America has received a $100 million endowment from philanthropist Eli Broad and three other donors, allowing the nonprofit educational organization to become a permanent teacher-training program.

The Eli and Edythe Broad Foundation pledged $25 million to the endowment, encouraging three other matching donations from the Laura and John Arnold Foundation, the Robertson Foundation and philanthropists Steve and Sue Mandel, The Los Angeles Times reported.

Teach for America generally draws its talent from pools of bright recent college graduates, sending more than 28,000 recruits over the past 20 years to teach for two years in some of the country's most challenging urban schools.

According to the organization, two-thirds of alumni continue to work full time in education, half of them as classroom teachers. More than 550 have become school principals or district superintendents. Others delve into other fields such as journalism, public policy and government. Wendy Kopp, the founder of Teach for America, said the primary purpose of the organization is to draw public interest to the challenge of supporting and improving public education.

"Under Wendy Kopp's leadership, Teach For America has quickly evolved from an innovative idea into what has become nothing less than an enduring American institution that has forever changed the landscape of public education," said Broad in a statement.

With a steady revenue stream, Kopp hopes that the organization can double its number of active members to 15,000, while increasing the number of communities it serves from 39 to 60, The Daily Tell noted.

According to The NonProfit Times, the $100 million endowment will produce about two percent of Teach for America's $200 million annual operating budget and will become one of the many funding sources for the organization, which includes federal and state governments, national and regional foundations, corporations and individuals.

Despite widespread support for Teach for America's mission and educational impact, critics have voiced concerns with the program as well, The Los Angeles Times noted. Early on, many considered the program's intensive training as not being effective enough to result in consistently good teaching. Recently, some groups have refused to call Teach for America's newly-trained instructors highly qualified. They claim that many of the program's teachers who staff tough urban public schools are simply not up to par because of the limited amount of training they receive.

These groups sent a letter to President Barack Obama criticizing a new federal law "lowering teaching standards" required under the No Child Left Behind Law. Supported by Teach for America, the legislation followed the successful litigation that challenged calling uncredentialed teachers highly qualified.

"The provision allows thousands of under-prepared and inexperienced teachers to continue to be assigned disproportionately to low-income, minority, special education and English language learner students and denies parents notification of the teachers' under-prepared status," said a statement from Public Advocates, a San Francisco law firm that led the legal challenge.