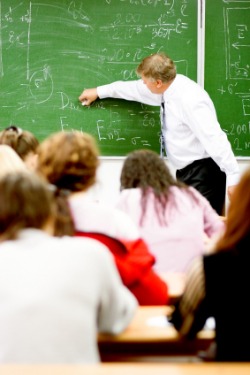 Educators have grown upset over a new ranking system introduced by the US News & World Report that plans to assign A through F grades to more than 1,000 teachers' colleges.

Initially, US News and its partner in the rating system, the National Council on Teacher Quality, an independent advocacy group, told schools that if they did not voluntarily give data and documents to them, they would seek the information under open-records laws. If those efforts failed, the raters planned to give the institutions an F.

Brian Kelly, the editor of US News, commented that the back lash from education schools proved that they are "an industry that doesn't want to be examined."

"These teacher-education programs are hugely important and not very well scrutinized," he said. "This is coming at a time when you have this tremendous national push for improvements in teacher quality: Who's teaching the teachers?"

In response to criticisms that many schools voiced about receiving a failing grade for refusing to provide information, Kelly stated that US News has rescinded the policy.

"We regret that language," he said. "It's really not the way we want to be doing business."

Education college deans have objected that the methods for arriving at ratings are not transparent enough and are not clearly proven by data. For example, US News has requested detailed information about courses, textbooks and admissions selectivity.

"Nobody's against being evaluated or having good reliable information available to the public about how we can prepare better teachers," said Mary Brabeck, dean of the school of education at New York University. "But what will we know if everybody uses the same textbook? What will that tell us about how you prepare highly effective teachers?"

Despite criticisms from educators, Robert Morse, who directs the higher education rankings of US News, said that the magazine has no intention of backing away from the project or methodology, Inside Higher Ed noted. He commented that US News never considered alternative methodologies besides the one the council has developed.

However, some officials sympathized with the concerns educators have expressed about the rankings, Education Week reported.

"These are folks for whom this is their life's work," said Kate Walsh, president of the council. "It's a very emotional issue. We totally understand why people are inclined to get upset about this. But on the other hand, we're asking folks to put that to the side and recognize what we all recognize, that there are many institutions in the US not preparing teachers adequately, in addition to many doing a great job."