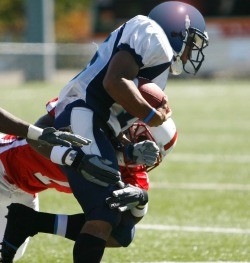 Every year, college athletics draws in much public attention and viewership. However, not as much attention goes to the high injury rate associated with sports. A new partnership between two Division I athletic conferences, the Big Ten Conference and Ivy League, plans to change that.

The Big Ten and Ivy League will combine their resources to research head trauma among athletes. As CBS Sports reports, the two conferences will form a team of neuroscientists, athletic trainers, and team physicians to better understand and determine how to decrease and treat athlete head injuries.

Dr. Dennis Molfese, the director of the center for brain, biology, and behavior at the University of Nebraska, provides ESPN with insight into the importance of studying athelete head trauma: "You have about 1.5 million brain injuries in the United States each year. A bunch of those could be the same person being reinjured - once you have a brain injury, the likelihood of experiencing another brain injury is certainly higher - but that's a significant level. It's something no one around the world has really addressed: how to recover from brain injuries, how to predict recovery better and safeguard recovery better and so on."

Inside Higher Ed shows how both leagues had independently studied and managed athelete concussions prior to forming the partnership. The Big Ten led the way in adopting a concussion management plan. In 2011, Ivy League limited the number of permisssible full-contact football practices, thus reducing the opportunities for traumatic injuries to happen.

However, as Ivy League executive director Robin Harris explains to ESPN, neither of these independent studies were extensive enough. "We don't have enough answers that we need to have in terms of how much is enough in hits to the head. What's the short-term impact, what's the long-term damage? We just don't know. Are certain individuals more susceptible to CTE? We think so. But who are those people? We don't know that."

The leagues have planned out intitial action steps post-partnership. After deciding on a set of behavioral, diagnostic, and neuroimaging tests to give athletes before their season starts, the leagues hope to gain federal funding for their research.

As ESPN reports, research will examine athletes both pre and post-injury. Molfese discusses the importance of such research with ESPN: "The big problem with concussion research in the past is you end up looking at people who suffer a concussion, but you never know what they were like before they experienced a concussion."

Insider Higher Ed explains that the new partnership between Ivy League and the Big Ten may induce other conferences to contribute to the project. As Molfese mentions, "this is an incredible opportunity to track a very, very large population. My bias is, the more the merrier. The more people we have studying the problem, the more advances we're going to make - and more rapidly."