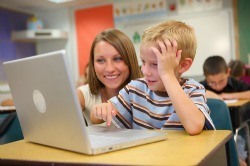 Last year, President Obama unveiled his ConnectED initiative, a plan to provide a high-speed broadband internet connection to 99 percent of America's students within five years, Venture Beat noted. The President also announced plans to connect over 20 million students and 15,000 schools within two years, "without adding a dime to our deficit." Recently, Obama came closer to meeting his goals via pledges for $750 million of contributions from tech giants, such as Apple and Microsoft.

The White House detailed specific contributions. Apple plans to donate $100 million in iPads, MacBooks, and professional development tools to enrich learning in disadvantaged schools. Microsoft intends to launch a substantial affordability program for public schools and will significantly discount the price of its Windows operating system. AT&T promised over $100 million to provide middle schools students with free wireless internet connection for educational devices. The Federal Communications Commission will also invest $2 billion over the next two years in an effort to expand internet access for schools and libraries.

Venture Beat reported the President's acknowledgement that technology is not the only factor needed to provide students with a great education. "We've got to make sure we've got outstanding teachers. We've got to make sure that parents are doing what they need to do. We need young people to make the effort and to have high expectations for themselves. But technology can help; it's a tool, it's just one more tool," Obama explained.

Currently, less than 30 percent of schools have the internet connection necessary for streaming videos and using other educational tools available online, The New York Times stated. Obama expanded on this statistic, saying, "Today the average American school has about the same Internet bandwidth as the average American home, but it serves 200 times as many people. The kind of 21st-century technology that is needed is available in too few schools."

According to Venture Beat, Obama hopes that the "cutting edge" technology that ConnectED can provide will better prepare students for career success and help make teachers more effective in the classroom. "We can make this happen," he said. "And just imagine what it will mean for our country when we do. Imagine what it could mean for a girl growing up on a farm to be able to take AP biology or AP physics even if her school is too small to offer it, because she's got the access to technology that allows her to take those classes online. [...] Imagine what it means for educators to spend less time grading tests and papers, more time helping young people learn. Imagine more businesses starting here and hiring here, because they know for a fact that the young people here are going to be equipped with the skills that are better than anybody else on Earth."