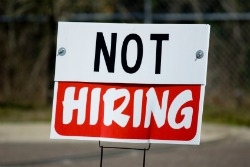 Teen job seekers are having a rough time finding employment, in part because they are increasingly competing with unemployed older workers who are willing to take any position that is available.

While last month's figures from the Board of Labor Statistics showed that the nationwide unemployment rate had dipped to just under 9 percent, the rate for job seekers ages 16 to 19 was nearly 25 percent. This is the third consecutive year that the unemployment rate for young people has been in that range.

"They started getting competition with adults who had lost their jobs, couldn't find anything else, and started to have to take those jobs that don't require as much experience and pay lower wages," explained WorkSource Oregon economist Brian Rooney, who was interviewed by KEZI News 9 in Oregon.

The Associated Press noted that automation is also partly to blame for the lack of available jobs for teens: As businesses have taken advantage of computers to assist in places such as supermarkets and photocopy shops, part-time jobs typically filled by teens have disappeared.

In addition, some believe that the rising minimum wage has affected businesses' willingness to hire teens. This year, eight states raised their minimum wage.

"I heard a restaurant owner in San Francisco, where the minimum wage is over $10 an hour, say there was no way he was going to hire a teenager at that rate," said Michael Saltsman, a fellow at the Washington, DC-based Employment Policies Institute, who was quoted by The Christian Science Monitor. "I know some states have talked about a youth training wage. The point is, you try to make it as easy as possible to employ someone."

To address the problem, the White House launched an effort this month to encourage the private sector to hire at least 250,000 teens this summer. The initiative is called "Summer Jobs +," and the Obama administration said it has already received commitments from companies such as Bank of America, AT&T, and CVS/Caremark to hire thousands of young people this summer.

Yet in spite of this effort, youth employment experts predict that this summer will be a tough one for teens looking for employment, in part because companies are still concerned about the economy.

"This summer is going to be a real challenge for young people who want a decent job or any job," noted Aaron Smith, executive director of the nonprofit Young Invincibles, who was quoted by The Christian Science Monitor. "I am glad we have some employers stepping up, but we will have millions of teens applying for these jobs and not enough positions."