Testers Required To Submit Photo To Take ACT And SAT 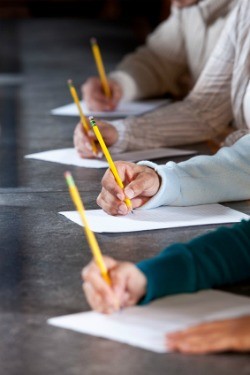 ACT Inc. and the College Board announced a new policy that would require high school students to include a photo of themselves in order to take ACT or SAT exams.

This new standard should provide increased test security and decrease opportunities for cheating, according to The Chronicle of Higher Education. The changes, detailed Tuesday of this week, require students to provide a photograph of themselves when registering. This photo will then be digitally printed on students' admission tickets as well as the roster used by test administrators at the various test sites. When students present their IDs, administrators will then be able to check them against the photos they have on file.

Such a move should help to prevent a repeat of last year's scandal in New York where a large-spread SAT cheating ring was discovered. Up to 50 students from five different high schools were thought to be involved in that case. One of the cheating test-takers allegedly used false identification and even took tests for females who had gender-neutral names, reported The New York Times.

"These reforms close a gaping hole in standardized-test security that allowed students to cheat and steal admissions offers and scholarship money from kids who played by the rules," Kathleen Rice, the district attorney in Nassau County, N.Y., where students faced the cheating charges, told Bloomberg.

Rice was closely involved in coming up with the new photo requirement, but other security measures are also being enacted. For example, students will now have to provide their gender and birth date upon registration. Students will also need to enter the name of their high school upon registration so that scores can be sent back to those institutions. Previously, students could decide whether to have scores sent to their high schools -- potentially allowing cheaters to slip through the cracks.

Additionally, stand-by registration is being eliminated. As a result, students whose names do not appear on the roster at the test site will not be allowed to take the test that day, according to Rice. This is all hoped to discourage potential cheaters, and to act as a warning.

"(Cheaters) will be caught, and they will be held accountable," Rice said in The New York Times. "The old system did not ensure that."

However, an official with the Educational Testing Service has said that just a small number of cheating on tests is done by student impersonation, according to The Chronicle. Last year, for example, about 3,000 test scores -- from approximately 2 million taken SAT exams -- were cancelled due to issues related to "irregularity". Impersonation accounted for just a small amount of those cancellations: some 150.

More often, cheating involves students' roaming eyes and collaboration of other sorts conducted by test-takers, according to Robert Schaeffer, public education director at the watchdog group FairTest. He said that while the photo requirement should cut down on impersonation issues, there are still many other ways to cheat.

"Using a digitized photo closes the barn door, now that the horse has left the barn," he told The Chronicle.