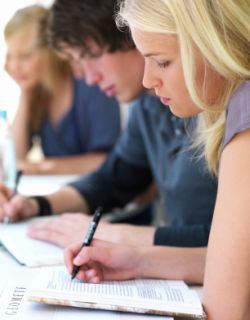 Taking tests, long considered to be merely a passive assessment of knowledge, may actually lead to greater student learning, a new study has shown.

Researchers led by Jeffrey Karpicke, an assistant professor of psychology at Purdue University, found that testing was a much more effective tool for retaining information than rereading or diagramming, AOL News reported. In other words, students can better prepare for exams by testing themselves rather than repeatedly reviewing a text, rereading notes or diagramming information.

The study, published in the journal Science, involved two experiments with 200 students. The first experiment divided students into four groups and gave them several paragraphs about a scientific subject to read. A week later, the students were asked to take a short-answer test to determine how much information they retained. Groups were instructed either to read the text for a certain amount of time, read the text multiple times, draw a concept map while reading the passage or after reading the text, take a "passage retrieval" test in which the students had 10 minutes to record everything they remembered.

In addition, Karpicke found that students oftentimes misjudge the success of their own study habits.

"When students have the material right in front of them, they think they know it better than they actually do," he said. "Many students do not realize that putting the material away and practicing retrieval is such a potent study strategy."

In the second experiment, researchers focused only on concept mapping and retrieval practice testing, The New York Times noted. Students who diagrammed while reading the passage, researchers found, included more detail than students who were asked to recall what they had read in essay format. But when evaluated a week later, the students who practiced retrieval performed much better than the concept mappers. Interestingly, the retrieval group was less confident about how they would do on a test a week later.

"The struggle helps you learn, but it makes you feel like you're not learning," said Nate Kornell, a psychologist at Williams College. "You feel like: 'I don't know it that well. This is hard and I'm having trouble coming up with this information.'"