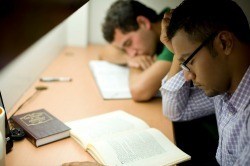 Americans affected by this weekend's Daylight Savings time shift may have looked and felt like something straight out of "The Walking Dead" on Monday, but for many college students, that sluggish, sleep-deprived state was just another day at the metaphorical office. Students' poor sleep habits are a bit of an epidemic -- one with very real, very dangerous consequences. Some colleges intend to do something about it.

Texas A&M University in Corpus Christi recently became the first college in the nation to install a sleeping pod on its campus, reports the Houston Chronicle. Students can reserve the dark, quiet and comfortable pod for up to an hour at a time to catch a quick nap between classes. Dr. Jackie Hamilton, recreational sports director for the school's Dugan Wellness Center, said the campus decided to install the pods in the interest of students' health.

"Lack of sleep is the No. 2 impediment to academic success" behind stress, Hamilton told the Houston Chronicle. She said students have been known to take power naps in unconventional places across campus, including chairs, benches and even their cars. "This is a little more comfortable than just sleeping anywhere."

The pod was partly inspired by a national initiative called Healthy Campus 2020, which aims to make students healthier. Sleep awareness is a large part of that initiative, and with good reason: A recent column on Bustle cited a Princeton University survey, which found that 58 percent of the university's students had reported feeling truly well-rested three or fewer days each week, despite campus efforts to promote healthy work habits and mental health. The problem may be especially notable at schools such as Princeton where all-night study sessions seem a point of pride, but students at all college campuses are susceptible to poor sleep habits, not just Ivy Leaguers.

Just how harmful are insomnia and generally poor sleep habits? Quite. As noted by the University of Texas, Dallas's The Mercury, a 2011 study from the Center for Disease Control found that 30.9 percent of people aged 18 to 24 sleep less than seven hours a day. Research suggests those who get such little sleep are more likely to get sick and become obese -- and that is just the beginning.

"Sleep deprivation helps significantly (increase) risk for hypertension and certain types of strokes, type 2 diabetes, obesity, Alzheimer's and cancer…and that's just the physiological effects," sleep expert James Maas explained. He said lack of sleep can lead to "irritability, anxiety and even clinical depression, and (has) a tremendous effect on your brain waves and the cognitive processing. You can't remember, you can't maintain creative and critical thinking skills, you take risks and it manifests into how long you've got to live."

In other words, students who pull all-night study sessions or who attend late-night parties to blow off steam may be doing more harm than good. Maas suggests it is a cultural problem -- one to which college students can be particularly vulnerable.

"The problem is, in our society, we still think it's macho to get away with as little sleep as possible," said Maas, "but literally, sleep deprivation makes you clumsy, stupid and it shortens your life."