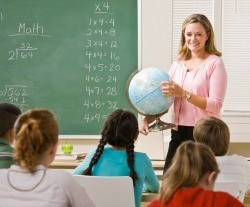 Job fairs for teachers rarely make major headlines. Not so for a fair held last week in Raleigh, N.C., which not only garnered a lot of press but also inspired statewide public discussion. Why? The North Carolina event was sponsored by a Texas school district, and according to WRAL, highlighted a long-running debate over teacher salaries and potential job loss.

The Houston Independent School District published a classified ad for the job fair earlier in the week. The ad, which touted starting salaries of $46,805, drew hundreds of teachers to the Raleigh venue. According to WRAL, Houston Superintendent Terry Grier previously served as superintendent of North Carolina's Guilford County Schools, so he is-well acquainted with the debate over North Carolina teacher salaries, which rank 46th in the nation. Starting pay for teachers in Wake County, for instance, is $35,000 -- with supplements.

Christine Kushner, chairwoman of the Wake County Board of Education, told WRAL that the job fair emphasizes how out-of-state competition threatens North Carolina's schools. Wake County already has 1,500 teaching positions to fill for the 2014-15 school year; losing more teachers would only exacerbate the problem.

"I think it serves as further evidence that we really need state and local action on teachers' salaries," Kushner said.

The North Carolina Senate budget, approved early Saturday morning, set aside $468 million to give teachers an average $5,800 raise, reported WRAL, but with one major caveat: Any teacher accepting the raise would forfeit his or her career status rights, or tenure. The budget also slashes funding for teacher assistants in early grades in order to pay for the raises. Beverly Emory, superintendent of Winston-Salem/Forsyth County Schools, told the Winston-Salem Journal that the budget is disappointing but "not terribly surprising." She said teacher job loss was "inevitable" and not without consequences.

"It's devastating," Emory said. "To impact the kind of instruction that we need in those K-3 classrooms, we need more adults."

Terry Stoops, the director of education studies at the John Locke Foundation, told the Charlotte Observer that he would not read much into Saturday's job fair. He said that higher pay may have inspired some of the turnout, but there are a myriad of other reasons teachers may have attended.

Nonetheless, teachers cited salary as a major motivator for attendance, and many seemed ready to take the plunge.

"If they offered me a position, I would definitely accept it and move now," Xavier Wallace, a second-grade teacher, told the Charlotte Observer.

A total of 350 applicants preregistered for the job fair, and many more attended as walk-ins. The Houston school district has 375 vacancies.

"Hundreds of teachers turn out for Houston schools job fair," wral.com, May 31, 2014, http://www.wral.com/hundreds-of-teachers-turn-out-for-houston-schools-job-fair/13690668/