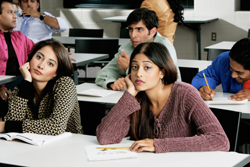 Our increasingly visually-oriented world has challenged educators to come up with new ways to educate and engage college students. Jeremy Short, professor of management at Texas Tech University, may have come up with the next big thing within higher education. In an effort to make dry content more entertaining--and digestible--for his students, Short co-wrote two graphic novels to teach students important business concepts, reported Inside Higher Ed.

"Textbooks are just plain boring," said Short. He criticized standard business textbooks for using disconnected examples and irrelevant photos that often do not resonate well with today's generation of students. His first graphic novel, Atlas Black: Managing to Succeed garnered an overwhelmingly positive response from both colleagues and students alike. In combination with the follow up novel, Atlas Black: Management Guru?, Short and his co-authors covered all the things his students needed to learn: principles of management, organizational behavior, strategic management and entrepreneurship. Short has used the novels for both his undergraduate and M.B.A. courses.

Students follow Atlas, a slacker turned entrepreneur, as he learns how to run a business, gets over a breakup and opens his very own cafe. Short added that the novels also include a full teacher's guide to help educators utilize this new form of content. In a press release, Short said, "What we tried to do was combine the academic rigor of textbooks, the fun factor of pop management books, excellent artwork and a compelling storyline." In addition to overcoming boring photos and content, Short also wanted to come up with something more affordable than standard textbooks. The new graphic novel is available to students for $14.95 and Inside Higher Ed stated that it is expected to be free online by spring 2011.

While some educators have been skeptical of the graphic novels, saying it can be difficult to frame a course around it since it follows a narrative arc or that some students may not take it seriously, others have welcomed the idea. "There's a lot of didactic information, and from my vantage point it was more memorable and unique because you could identify the information with specific characters," said Dale Dunn, professor and chair of the pathology department at the Texas Tech School of Medicine. Dunn is also currently in the M.B.A. program and took Short's organizational behavior class.

Other professors, including E. Lauck Parke, an associate professor at the University of Vermont School of Business, and Thomas Moliterno, assistant professor of management at the University of South Carolina, have even incorporated the novel into their own classes. Moliterno told Inside Higher Ed that he intends to use them again in future classes. "Textbooks tend to be imposing to students and expensive, and I think it's a real challenge to find a textbook that students are willing to buy and/or read," he said.

According to the press release, the graphic novels have also become a guide for those who are interested in starting their own business. One reviewer praised the first novel, saying, "I'm 65, have heard of this kind of publication without ever having purchased or read one...Professor Short and his team hooked me pretty quick...Complex management ideas are presented here as simply as they could be, and because of the reader's growing fondness of Atlas and his friends, an investment in the final outcome is created almost against our will."

Inside Higher Ed reported that 86 percent of Short's students described their experience with the graphic novel as favorable. Short noted that the most rewarding part was that students were left wanting more. "The idea of a student asking what comes next in a textbook is really just unfathomable," he said.

Not Just Comics: Or, Why Are Graphic Novels Valuable for Management Education?" flatworldknowledge.com