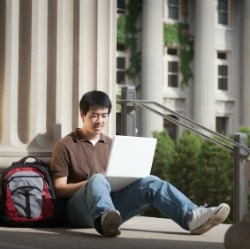 Imagine earning a college degree without ever buying a single textbook, relying instead on free, open-source materials. That is precisely what a new higher education initiative aims to achieve -- if it can quell professors' skepticism, that is.

Inside Higher Ed reports that the new Lumen Learning initiative was created to help institutions transition to open education resources (OER), phasing out expensive, traditional textbooks. It was co-founded by Brigham Young University associate professor David Wiley and entrepreneur Kim Thanos, who say many institutions are slow to embrace the OER movement despite its cost-saving potential.

"There is over $100 million poured into the creation of these OER, but walk into a classroom or a department at random -- the odds that you would find OER being used are practically zero," Wiley told Inside Higher Ed, noting that institutions' "fear of the unknown" is the movement's chief barrier. "It's an if-you-build-it-they-will-come situation. There really is a need for somebody to do that last bit of work."

According to The Chronicle of Higher Education, Lumen is developing an associate degree in business administration that uses only OER. It is currently testing the model -- called Textbook Zero -- with an undisclosed East Coast community college, and it hopes to launch similar programs in general studies or computer science disciplines soon.

Wiley estimates that students who graduate without ever buying a textbook could save 30 percent on their total tuition costs, a matter of increasing importance for students. According to The Chronicle of Higher Education, a U.S. Public Interest Research Group survey found that 70 percent of students have refused to buy a course textbook because of cost, and a Florida Virtual Campus survey found that 30 percent of students have skipped courses entirely for the same reason. Still, many professors and administrators remain wary of OER materials.

"I think the biggest issue is still finding quality materials through open source," JoAnna Schilling, vice president of academic affairs at Cerritos College, told Inside Higher Ed. "In many cases the faculty felt that much of their course materials could be found via OER, but that there were still some materials that had to be supplemented through traditional sources."

There is evidence to support the widespread use of OERs, however. According to a press release on Business Wire, Lumen Learning came about as a result of the Kaleidoscope Open Course Initiative, a project in which Thanos and Wiley designed OER-based courses for ten institutions nationwide. Students who participated in Kaleidoscope reduced their textbook costs to zero and improved their overall course success, and most professors said their students using OER materials were as or better prepared than those students using traditional texts and that it was likely they would use OER in their future courses.