The Economic Consequences Of Job Automation 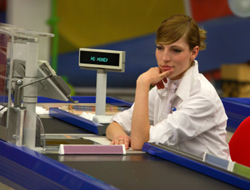 Technological advances are supposed to make life easier. But what happens when technology starts to do things better than humans? In some industries, job automation is accelerating so quickly that we may be losing valuable jobs to it.

A recent article in the Los Angeles Times discussed how automation in the retail sector may be hindering efforts to lower the nation's unemployment rate. Retail has long been the reliable to-go industry, employing nearly 1 in 10 Americans. However, as companies and stores try to increase revenue by pushing out more products using fewer resources, machines are slowly taking over human jobs. From self checkout lanes to vending machines, consumers can get almost anything they need without interacting with a single clerk. At 156 U.S. Fresh & Easy Neighborhood Market locations, for example, all checkout stations are do-it-yourself.

"It's part of being a modern grocery store," explained Brendan Wonnacott, a company spokesperson. "And keeping our checkout process simple helps keep our costs low."

"Sadly, it might be taking away someone's job, but it's much more efficient," said Najera.

Indeed, retail employment has barely changed over the last year, yet $740 billion was transacted through self-service machines in 2010, up nine percent from the year before, noted Greg Buzek, president of technology research firm IHL Group.

However, low-skilled jobs are not the only victims of automation. As The New York Times pointed out, progress in computer science and linguistics has allowed automation to take over even higher-level jobs, particularly within the legal industry. When it comes to finding relevant documents for a lawsuit, computers and software programs are getting better at mimicking human reasoning. One computer can now do what an army of lawyers and paralegals do in less time and for less cost.

As Bill Herr, a lawyer at a major chemical company, put it, "People get bored, people get headaches. Computers don't."

Increased automation has many consequences. In some cases technology can dumb down a workforce; in others, it can create new opportunities (for example, widespread adoption of smart phones has created new opportunities for programmers and developers).

Another important aspect of the discussion is the impact that automation has on consumption. As Martin Ford pointed out in The Huffington Post, "When a worker is replaced by a machine, that machine does not go out and consume". As workers lose their jobs to automation, they have less discretionary income to stimulate the economy and less money going to businesses means fewer job openings and perhaps more reliance on automation to get things done.