The Little Schoolhouse That Could

For a group of students at Fairleigh Dickinson University, a tiny schoolhouse in Costa Rica was a place for huge lessons learned.

From January 6th to 16th, a group of 10 students and four faculty members traveled to Manzanillo, Costa Rica as part of the university's Alternative Winter Break program. The program, which was started last spring when a group of 22 students went to New Orleans to assist people affected by Hurricane Katrina, gives students the opportunity to learn off campus while performing community service projects.

As part of its study abroad program, Fairleigh Dickinson, located in Madison, NJ, offers a two-week program to study in Costa Rica. Since, seniors Samantha Boyce and Kayla Hastrup had both participated in that trip, when interest in Alternative Winter Break programs mushroomed on campus, they knew exactly where service would be of value.

"Kayla and I had previously gone to Costa Rica on a two-week study abroad program and formed relationships a year prior in Manzanillo," Boyce, 21, said. "When this group of students came to us interested in planning an 'alternate winter break' in a different country to perform a service project we knew exactly where to go.

We had a goal to raise money and to rebuild, clean, and paint the elementary school in the village of Manzanillo...[and] that goal soon turned into a reality."

Aside from the needed repairs, Boyce was struck on her first visit by the unorthodox schooling system that was in place in Manzanillo.

"There are three classrooms where they combine grades together to teach," she said. "Schooling in this village is much different than the regimented schooling here in the United States. Students basically come to school as they please."

"Many of the school's desks were half-rotted; a family of toads had taken up residence in one of the classrooms and roaches inhabited some of the desks."

Hastrup, 21, had a similar impression, one that made her appreciate her American education.

"The thing that shocks me the most is that a normal age for someone to graduate 6th grade could be 16 or 17 years old," she said.

"The three classrooms are broken out into Kindergarten, [grades] 1-3, and [grades] 4-6. Since they are all being taught the same thing, I can't imagine they learn as much as a student in the States."

"If the children want to go to high school, which few do, they have to travel over an hour each way into Bri-Bri," she continued. "Unlike the United States, schooling for a villager is not a necessity. They are able to still make a living and survive with little or no schooling. Those who do move on are very privileged, but the lack of motivation to continue definitely exists."

The Little Schoolhouse That Could

With education in the village already a challenge, the group hoped that at least the conditions in the schoolhouse could be improved. This year, students led by Dean of Students Brian Mauro, traveled to Manzanillo -- located on the Caribbean coast -- to help renovate Manzanillo's four-room schoolhouse.

"The school in Manzanillo was in a state of disrepair. Neither the Costa Rican government nor the local community were able to maintain it," said Dan Landau, a graduate assistant with the FDU Office of Public Relations who traveled with the group as an administrator and the group's official photographer.

According to Landau, the problems were vast. Many of the school's desks were half-rotted; a family of toads had taken up residence in one of the classrooms and roaches inhabited some of the desks. 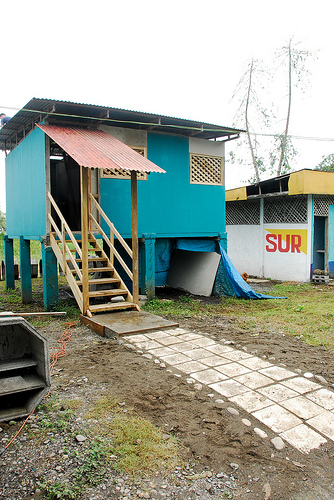 "The walls needed new paint badly and the windows, which were made of rebar, were rusting," he said. "The bathrooms were not functional and the schoolyard was a little overgrown. Someone had started building a new bathroom for the school; however, for whatever reason, it had not been finished, and the empty shell of the building for the new bathroom was all that had been built."

Landau says that the group performed five main tasks while in the village: cleaning and painting the classrooms, gardening and cleaning up the school yard, construction on the new bathroom, and installing new concrete tile walkways to replace the old muddy paths. The group also spent a day doing a beach clean-up, picking up trash on a two-mile stretch of the beach.

"Besides photographing everything and otherwise documenting the trip, I spent most of my time working on the bathroom construction," Landau said. "I have some carpentry skills and put them to use, building the bathroom stalls and the windows in the bathroom."

By the end of the trip, school projects complete, the true scope of what they had learned dawned on the participants.

Hastrup was left struck by the simple values of the Manzanillo villagers, especially compared to those of Americans.

"as soon as you arrive it is clear that they do not need wealth or money to be happy,"

"My overall impression was noticing what a tight-knit community Manzanillo truly is. They have a motto that 'the less you can get is the best,' and as soon as you arrive it is clear that they do not need wealth or money to be happy," she said.

"They live off the land and are grateful for everything life has to offer. They also live by the expression 'pura vida,' meaning 'pure life' which I strive to live by even living back in the States. It shows their connection with the land and the community, while still being economically stable, healthy and happy."

"I think in the States people become overwhelmed and over-absorbed by the idea of wealth and success," she continued. "Taking a step back and having an open mind about a different lifestyle has changed my perspectives and helped me prioritize what is truly important in life."

For Boyce the selflessness of the experience was what was most fulfilling.

"Both times going to Costa Rica, I learned more and more about myself. Helping others and expecting nothing in return is a very rewarding feeling that a lot of people do not get to experience," she said. "I have formed relationships with people in Costa Rica that I truly treasure.

Locals continuously ask about life in the United States. [After my experience in Manzanillo,] I would question if they would even like this country."

Career and Education News
Home >
News>
The Little Schoolhouse That Could