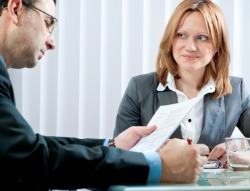 When it comes to job hunting, many of us think interviewing is the worst part. Even the most seasoned and experienced professional can make a small mistake that could potentially cost him or her the job. Some candidates, however, make outrageous mistakes and completely bomb an interview.

As The Wall Street Journal reported, job website CareerBuilder.com recently released a list of the most memorable interview blunders. According to a CareerBuilder press release, the national survey, conducted by Harris Interactive, interviewed 2,201 hiring managers and human resource professionals from various industries and company sizes between November 6 and December 12, 2013. Participants were asked to share interview horror stories and revealed some shocking examples.

As The Wall Street Journal pointed out, some might argue that these moves leave a lasting impression, which helps a candidate stand out in the crowd. That's not always a good thing, though.

Michael Erwin, a senior career adviser at CareerBuilder, told The Wall Street Journal, "People need to use common sense here. Trying to stand out -- or trying to be witty or funny -- works to your disadvantage. You're remembered for the wrong reasons."

While the examples above are extreme, CareerBuilder did also note that applicants often make other, less jaw-dropping mistakes. According to the press release, the most common mistake that employers identified was appearing disinterested (55 percent). Erwin explained in The Wall Street Journal that candidates might not actually be bored, but instead simply did not do enough research or are trying to find a way into an industry that they do not belong in. According to the press release, other common mistakes included dressing inappropriately (53 percent), appearing arrogant (53 percent), talking negatively about current or previous employers (50 percent) and answering a cell phone call or texting during an interview (49 percent).

Unfortunately, Business Insider noted that there are some factors beyond your control that could also affect whether you get hired. For example, the time of your interview and the weather -- Business Insider reported that, according to Glassdoor, the best time to be scheduled for an interview is 10:30 a.m. on a Tuesday since this is usually the time and day when people are the most productive in the office. Additionally, University of Toronto researchers found that medical school applicants fared worse when interviewed on rainy days compared to sunny day interviewees.

Interviewing can be nerve-racking, but with enough preparation and research, you should be able to avoid the mistakes mentioned above.

"Going over common interview questions, researching the company, and practicing with a friend or family member can help you feel more prepared, give you a boost in confidence, and help calm your nerves," said Rosemary Haefner, Vice President of Human Resources at CareerBuilder, in the press release.