The Politics and Professionalism of Hugging 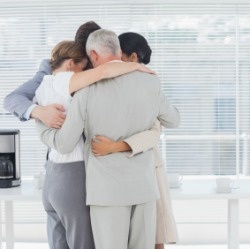 It may seem the most natural gesture in the world: You and a colleague knock a major project out of the park, and in your enthusiasm, you offer her a celebratory hug. Some experts warn that little, innocuous hug could actually be a big complication for your co-worker, and may even undermine your working relationship. If your boss sees it, it could even damage your professional reputation. If you are a default hugger, it helps to know the unwritten rules workplace hugging etiquette.

Research psychologist Peggy Drexler wrote a column for TIME recently in which she called for an end to what she coins the "hugging arms race," especially in the office. She says that she is not a hugger -- and she is not alone. Nonetheless, hugging is increasingly common in the modern workplace.

"It's something that's in the zeitgeist, but we really haven't made any rules. My own rule is: I won't hug if you don't," Drexler told NPR. She said it can be difficult for those who do not like to hug to escape the embrace without feeling uncomfortable, and recalls finding herself in this position once or twice. "It struck me, 'I don't want this, but how do I get out of it without being hurtful or graceless?'

Personal preferences aside, Alison Strickland, senior public relations manager for The Creative Group, warns that despite its prevalence in the workplace, a 2011 survey conducted by her organization reveals that bosses overwhelmingly view hugging as unprofessional.

"While three in 10 executives surveyed by TCG said hugging coworkers is at least somewhat common in the United States and nearly one-quarter said it's not uncommon to greet clients that way, a majority of respondents frown upon the practice," Strickland told CityTownInfo. "Seven in 10 executives said hugging coworkers is inappropriate in a business setting, and 76 percent said they rarely, if ever, hug clients or business contacts." In other words, hugging could put you professionally out of sync with your boss, which could hurt your professional stock.

This is not to say that hugging is always inappropriate in a professional setting. Drexler told NPR that she might be more inclined to hug a coworker who has suffered a personal loss, or who is undergoing a major life event, like an engagement. In general, however, Drexler advises readers to hug sparingly.

"Hugging is acceptable once you have established a business relationship and the other person is comfortable with 'the hug,' Harr told CityTownInfo. She said she advises her students to observe a specific company's culture before risking the gesture. She also recommends considering one's cultural heritage to avoid an etiquette faux pas. "In some countries a hug is acceptable; (in) others it's taboo."

What if you are the one who dislikes hugs? If you sense that an unwelcome embrace is coming, Drexler suggests trying to get out of it by dropping your cell phone, keeping something between you and the hugger or escaping to find something else that needs your attention. If those tactics will not work, she suggests simply telling the colleague that are are "not a hugger," or taking physical control of the situation by offering a handshake instead.

"I would love to be able to wear my rules like a campaign button," Drexler told TIME. "They're very simple. I won't if you won't. And we'll like each other just as much."