Think Twice Before Taking Your Cell Phone to Your Next Meeting 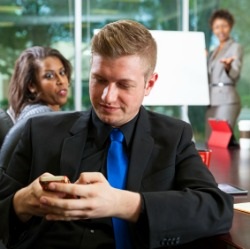 Regardless of where you are, chances are everyone around you is on their cell phone. People are constantly checking their email, updating social media, sending text messages or looking something up on the Internet. Even during business meetings and interviews, people still do not put their phones down, and a recent study showed that this behavior may be hurting people's career advancement.

BusinessNewsDaily reported that researchers from the University of Southern California's Marshall School of Business and Howard University examined workers' mobile phone activity during formal and informal business meetings and found that reactions to employees' mobile etiquette -- or lack thereof -- varied greatly by gender, age and region. According to a press release, 59 percent of men felt it was acceptable to review text messages during informal meetings, compared to 34 percent of women. More men than women also thought it was okay to answer a call during such meetings -- 50 percent versus 26 percent. Region also seemed to matter as West Coast employees reported being less tolerant of mobile phone use during meetings than their East Coast counterparts. Researchers also found a gap in opinions when it came to age -- 66 percent of working adults under 30 said texting or emailing was acceptable, while just 20 percent of those aged 51 to 65 tolerated it.

"Not surprisingly, millenials and younger professionals were more likely to be accepting of smartphone use, but they might be doing themselves a disservice," said Peter W. Cardon, co-author of the study, in the press release. "In many situations, they rely on those older than them for their career advancement."

According to BusinessNewsDaily, the study also found that people were offended when someone simply had their cell phone out during a meeting -- 20 percent of professionals said this was a faux pas.

Cardon told The Wall Street Journal that managers should set ground rules before the start of a meeting.

Similarly, Walter G. Meyer, a writer and business consultant who has taught corporate communications and productivity as well as interviewing techniques, told CityTownInfo that there are appropriate ways to address the matter.

"Cell phone usage, whether at work, in a coffee shop, gym or any other public place really comes down to two things: courtesy and common sense," said Meyer. "Unfortunately, both of those seem to be rare these days."

Meyer noted that cell phones should be completely off during important meetings, but if you must take a call, he suggested informing the person running the meeting and letting him or her know why.

"It may help to inform them that you have a good excuse. Most people will understand. Then as soon as your phone buzzes, grab it and hurry out of the room before answering," recommended Meyer.

In regards to laptops during a meeting, Meyer said they should only be used for taking notes, not doing other work or taking care of personal business.

"It is a discourtesy to be doing other work while someone is speaking. If you really can tune out the speaker -- should you be at the meeting at all?" said Meyer.

When asked about cell phone use during an interview, Meyer told CityTownInfo that cell phones should stay off, as doing so shows you are completely focused on getting the job and take the interview seriously.

"Our company has a general policy surrounding mobile devices that basically states the mobile device should be in low ringtone or vibrate mode at all times and that it only accompanies you into a meeting if warranted," said Campbell.

Campbell also said that cell phone use during an interview could cost a candidate the job, unless she was warned beforehand that the candidate was expecting a high-priority call.

Appropriateness sometimes depends on the person, however. Campbell told CityTownInfo that she would not mind if a candidate had his or her phone out, but not used, during an interview.

"Phones or other mobile devices that are present but not used during an interview don't bother me," said Campbell.