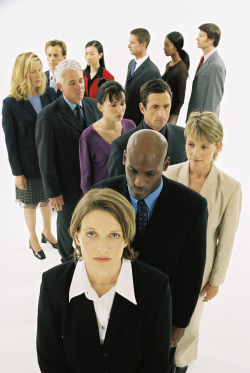 WWTG-Fox 5 reported that thousands of job seekers gathered for a federal government job fair on Wednesday, July 14. The Partnership for Public Service, the nonprofit, nonpartisan organization that has hosted the event for eight years, said more than 7,000 people pre-registered for the event. Of that, an estimated 90 percent actually showed up to meet with the hundreds of recruiters that were there to represent more than 80 federal agencies, making this the largest fair ever hosted by the organization. Most of the attendees were college students or recent graduates.

The government is looking to fill more than 50,000 entry-level positions in the next year. Agencies also want to fill 60,000 paid internships. According to NPR, entry-level hiring in the federal government has seen steady growth over the last five years. Since 2005, almost 20,000 people were hired for entry-level positions. "The government has the oldest workforce of any sector and therefore will experience the baby boom retirement wave earlier and faster than any of the other sectors," said Max Stier, president and CEO of the Partnership for Public Service.

The fair took place at the National Building Museum in Washington, D.C. Many waited more than 45 minutes to talk to a recruiter and some travelled a great distance to be there. Carolyn Basalla, a 22-year-old who graduated from the University of Arizona in December, booked a last minute flight and flew overnight for 12 hours, with three connections. "I hate the job search. It's incredibly frustrating and incredibly time-consuming, and you just have to keep going and hope that it ends well," she told NPR. Basalla hopes to land an intelligence job to utilize her background in Middle Eastern studies. Although the stable salary and great benefits are appealing, Basalla said that her dream job is working for the government as she has a real passion for it.

Others, however, did not share Basalla's sentiment. While recent grads once went after Wall Street jobs and big bonuses, in today's economic climate a steady paycheck has become the goal. Tajh Glenn, 21, told NPR that his goals are straightforward: "My dream job is a job that's going to keep me financially stable, and that's going to keep the bills paid," he said. "Times are really tough right now, and it's really hard to find a nice job that's going to pay." Stier noted at least 1,000 more job seekers attended the fair this year than last year, showing that more people are shifting priorities.

NPR reported that the online process for applying for a federal job will become more streamline by November. As requested by President Obama, agencies will no longer require KSAs, or the time-consuming Knowledge, Skills and Abilities essay, in first-round applications. This will give the government a larger pool of applicants. According to the Partnership for Public Service, the government will need to fill 273,000 mission-critical positions over the next three years, which is why there is a push for more applicants.

The Partnership for Public Service listed a number of tips and recommendations as well as posted various articles on how to navigate the application process on their website. The organization recommends researching individual agency sites to learn more about each position and about the agency's mission. When applying, highlight your relevant skills--such as internships, jobs, campus activities and community service work--and tailor your resume. NPR adds that many agencies use computers to sort through first-round applications. Avoid being creative and use "buzzwords" from a job's list of duties or responsibilities instead. This increases the likelihood of getting picked up by the computer.

The Partnership also recommends visiting USAJOBS.gov for assistance with formatting your federal resume. Federal resumes are far more detailed than traditional resumes and can range from one to five pages in length.

Lastly, both NPR and the Partnership stress the importance of networking. Although the online application process is important, you can learn much more by networking and attending job fairs.